Stronger Ties, A Stronger Alliance, Serbia And Mother Russia Stronger More Than Ever As General Of The Russian Army And Minister Of Defence Sergei Shoigu Visits Belgrade !

Serbia and Russia are carefully building and guarding their special ties, Serbian and Russian defense ministers Aleksandar Vulin and Sergei Shoigu have said.

After ceremonially welcoming Shoigu - who was is in Serbia for WW2 Belgrade Liberation Day celebrations - Vulin met with him at the Old General Staff building later on Friday, the MoD announced.

According to a statement, Vulin "highlighted the closeness of the two countries, because they have always been on the same side."

"In the most difficult moments of our history, and yours, we were on the same side. That is what is remembered, that is what defines the future. Therefore we do not have the right to be less courageous than our ancestors," the Serbian minister said, addressing Shoigu, and added:

"You know that Serbia is a military neutral country, but to be military neutral and independent it must be military strong, therefore, your assistance is immensely important. The agreement of reached by presidents Putin and Vucic is also important, and thanks to it we can say that today we have the ability to defend our sky."

"I would like to also thank you personally, I know how much effort and work went into this," said Vulin.

Shoigu thanked him for the invitation to spend Friday's holiday day together.

"73 years ago, our fathers and grandfathers were liberating Belgrade shoulder to shoulder. This is especially important today when many are trying to overwrite history, and when in some countries monuments are raised to those who fought against us and were on the side of fascism. We cannot accept that," Shoigu said, and reminded Vulin that he had promised during their previous meeting in Moscow that the six warplanes Russia has donated to Serbia would be in Belgrade by today's holiday.

"As you can see, they are here. I hope that the planes will be a safe shield and guarantor of Serbia's security and independence," said the Russian defense 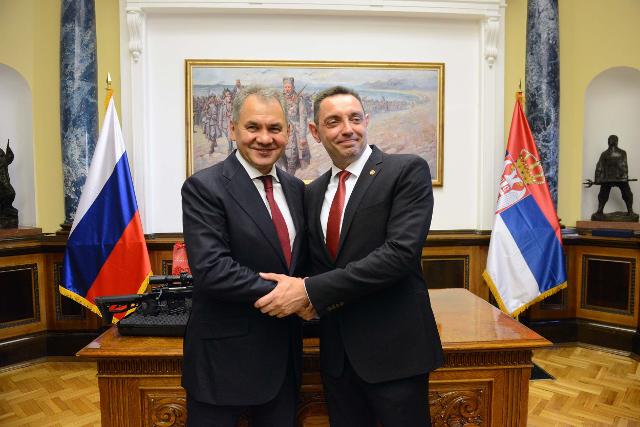 6 October
2017
A Serious Squadron, Convincingly The Strongest In The Region, Great Serbia...
1765

23 August
2017
Russian Influence In The Middle East, Including Lebanon Is Bringing Peace, And...
1751

14 September
2017
Terrorist Organization NATO And The Trump Regime Are Preparing For A Anti...
2674

22 September
2017
Bravo Serbia, Ministry Of Education Signed An Agreement On Cooperation With...
1952

10 November
2017
Things Are Getting Hot Between The Nazi Ukraine Junta And Serbia, Ivica Dacic...
2347

12 November
2017
Serbian Park In Belgrade Is Renamed In Honor Of The Russian Army Ensemble...
3465