There Is No Stopping This Madness, The Trump Regime Together With Saudi Warplanes Have Once Again Slaughtered Innocent Civilians, 8 Murdered Including A Child In Yemen !

U.S. Regime And Saudi warplanes carried out a raid against the Yemeni capital city of Sanaa on Sunday, bombing the nation’s department of records building, killing at least eight people, including a child, and wounding 58 others. 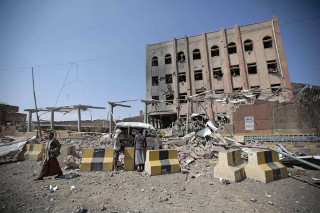 The Shi’ite Houthi movemet issued a statement saying that among the casualties were many civilians, but did not offer further details. The building would technically be considered part of Yemen’s “police,” though clearly not a military target in any way, shape, or form.

Yet this is common in Saudi airstrikes against targets in the Shi’ite part of Yemen, where decisions on what to bomb seem to be more based on whim than any particular military utility, and a bombed-out schoolhouse is just as likely to get bombed again as anything else.

As usual, Saudi officials have offered no comments on the strike, neither defending the decision to attack the site, nor providing any indication why this of all places happened to be a target on Sunday.

5 September
2017
Murderers And Child Killers, Saudi Arabia And The Trump Regime Care Nothing For...
2064

4 October
2017
The Trump Regime And Saudi Coalition On United Nations Blacklist For Killing...
1443

31 December
2017
Shocking As Officials From The Saud-Backed Yemeni Government Have Issued A...
954