They Are All Being Hunted Down, One By One Catalan Ministers Taken To Prison By The Fascist Regime Of Spain, Leader Carles Puigdemont Still In Belgium ! (PHOTOS)

Eight sacked Catalan ministers have been remanded in custody by a Spanish high court judge over the region's push for independence.

Prosecutors had asked the judge to detain eight of the nine former government members who turned up for questioning in Madrid.

They are accused of rebellion, sedition and misuse of public funds.

The request also covers four other dismissed Catalan ministers who did not show up in court in Madrid as requested.

Five other senior members of the Catalan parliament, as well as Speaker Carme Forcadell, are facing the same charges but, because of their parliamentary immunity, their cases are being handled by the Supreme Court. Their hearings have been postponed until 9 November.

This came after Catalan lawmakers voted to declare the independence of the affluent north-eastern region. The Catalan government said that of the 43% of potential voters who took part in the referendum, 90% were in favour of independence.

Former Business Minister Santi Vila was granted bail at the request of prosecutors. He resigned before the Catalan parliament voted for independence on Friday.

Five other senior members of the Catalan parliament, as well as Speaker Carme Forcadell, are facing the same charges but, because of their parliamentary immunity, their cases are being handled by the Supreme Court.

Their hearings have been postponed until 9 November.

Mr Puigdemont is currently thought to be in Belgium, and has said he will not return to Spain unless he and four of his fellow sacked colleagues received guarantees of a fair trial. He did not specify the exact demands.

Belgium's federal prosecutor has said the law will be applied once an arrest warrant is received, according to Efe news agency.

Mr Puigdemont's lawyer said the climate was "not good" for him to appear in court, but he also said his client would co-operate with the authorities in Spain and Belgium.

The deposed leader was photographed in a cafe in Brussels on Thursday while other Catalan government members appeared in court.

Puigdemont left Spain and appeared in Brussels on Monday, the same day Spain's state prosecutor announced he was seeking charges of rebellion, sedition and misuse of public funds against him and 13 ex-ministers.

The high court, known as the the Audiencia Nacional, summoned Puigdemont and 13 former ministers over their contentious independence drive, but only nine of them turned up to the session Thursday, and without Puigdemont. 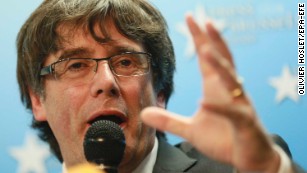 The lawyer for most of the ex-ministers, Jaume Alonso Cuevillas, said the decision was "politically motivated" and "disproportionate," arguing that judge could have simply seized their passports to stop them leaving the country.

Puigdemont and the other four ministers are believed to still be in the Belgian capital. The state prosecutor in Madrid earlier Thursday asked the court to issue national and European arrest warrants for all five of them.

Puigdemont's no-show was the latest act of defiance from the renegade leader, who has caused consternation in Madrid following an independence referendum on October 1, which Spain's Constitutional Court ruled illegal. The crisis came to a head last week when the Catalan parliament declared unilateral independence.

In response, Madrid sacked Puigdemont and his government, and stripped Catalonia of its cherished autonomy.

A separate case against six other Catalan lawmakers related to the independence bid was adjourned at the Supreme Court. All six, including parliament speaker Carme Forcadell, showed up to the session.

Puigdmeont, who still considers himself Catalonia's rightful leader, denied he was evading justice, claiming that the charges had no legal basis and sought "only to punish ideas," according to his spokesperson.

"We are facing a political trial," the spokesperson said.

According to the spokesperson, the nine ex-ministers who turned up to court Thursday did so tomake a complaint against the Spanish judicial system's "lack of guarantees" to allow the pursuit of political ideas.

Puigdemont's Belgian lawyer, Paul Bekaert, told Reuters the former leader would cooperate with Spanish and Belgian authorities, even though he did not appear before judges Thursday.

"The climate is not good, it is better to take some distance," he said.

Puigdemont has denied he traveled to Brussels to seek political asylum. In public remarks on Tuesday, he claimed he was in the Belgian capital to "to act with freedom and safety" and to seek support from Europe in finding a diplomatic solution. 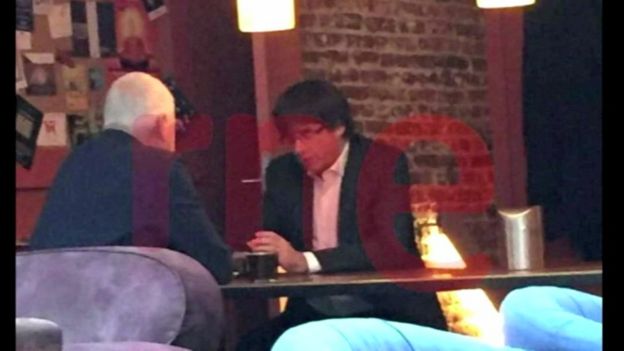 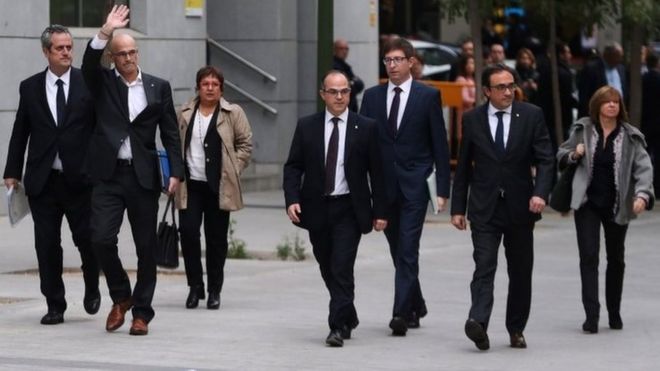 10 September
2017
War Of Words Between Catalonia And The Fascist Government Of Spain, Threats To...
1863

4 October
2017
Catalan To Proclaim Independence Within Days As Fascist King Of Spain Screams...
1442

11 March
2018
The Spanish Regime Will Not Release Catalan Leader From Prison, Jordi Sanchez...
1402

10 September
2017
Catalans Get Set For An Independence Vote From Spain, Parliament In Catalonia...
1286

14 September
2017
Fascist Regime Of Spain Threatens To Arrest All Mayors Who Are Supporting...
2784

5 October
2017
Separatist Movement Of Catalonia Roots Deep In History, Whereas The Donbass...
1887