Things Are Getting Pretty Ugly As The International Community Is Choosing Sides, Mixed Reactions To Warmonger Trumps Rocket Attack On Syria !

International reaction to Friday's strikes against Syria has been mixed. 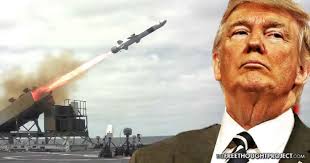 Russia called for a meeting of the U.N. Security Council following the strikes.~

U.S. allies have responded pretty positively. Canada, Germany and Turkey came out in support of the strikes.

NATO's Secretary-General Jens Stoltenberg has also expressed his support for the strikes.

None of those countries actually participated in the strikes. Canada's Prime Minister Justin Trudeau and Germany's Chancellor Angela Merkel had already ruled out participating in military interventions in Syria ahead of the strikes.

But Russia and Iran, Syria's main allies, condemned the attacks. Iran's leader called the U.S., French and British heads of state criminals. And Russia has called the attacks an "act of aggression against a sovereign state."

Russia also called for an emergency meeting of the U.N. Security Council. A number of council members voiced concerns Saturday that the U.S., France and the U.K. strikes violated international law.

19 October
2017
Promises Promises As Once Again The Nazi Ukraine Junta Will Not Rebuild The...
2828

24 January
2018
Turkey Says It Will Coordinate Military Operation In Afrin With Iran And Russia...
2999

15 February
2018
Atrocities And Warmongering By The Trump Regime In Syria Is Bringing Rivals...
1832

19 April
2018
Sickening As The United Nations Once Again Blocks Chemical Inspectors OPCW From...
2054

22 April
2018
Chemical Inspectors Finally Arrive In Douma After A Long Delay Being Blocked By...
1437

4 January
2018
Using The CIA Manufactured Protests In Iran, Trump Can Now Pull The Switch On...
1721