Trump Regime Getting On Serbia's Nerves, "Hostile" As The U.S. Regime Is Forcing Belgrade To Choose Between Russia And The West !

Serbian Defense Minister Aleksandar Vulin has lambasted ‘hostile’ remarks by US Deputy Assistant Secretary of State for European and Eurasian Affairs Hoyt Brian Yee who said that Belgrade will have to make a choice between Russia and the West.

“Undoubtedly, this is the heaviest public and very undiplomatic pressure on our country and goes against our right to make our own decisions,” the minister said in a statement circulated by the TANJUG news agency. “This is not a statement made by a friend or a person respecting Serbia, respecting our right to decide independently. Serbia makes its decisions on its own, without paying attention to the importance of those who believe that they can decide for us.”

Hoyt Brian Yee, US Deputy Assistant Secretary for European and Eurasian Affairs, said speaking at the 17th Serbian Economic Summit on Monday that Serbia would have to choose between Russia and the West rather than sit on the fence, if it wants to join the EU. The State Department official cited Croatia and Montenegro as an example and noted that, although the Balkans had gone a long way after the wars of the 1990s, stability and security cannot be taken for granted. In his view, there is a positive trend, but the risk of further conflicts lingers.

His remarks were Washington’s first public criticism of Belgrade’s policy of building good relations with the West, Russia and China. The West earlier exerted pressure on Serbia behind the scenes, saying, according to members of the Serbian Cabinet, that Belgrade should end cultivating ties with Russia, join the anti-Russian sanctions and close the Russian-Serbian humanitarian center in Nis. 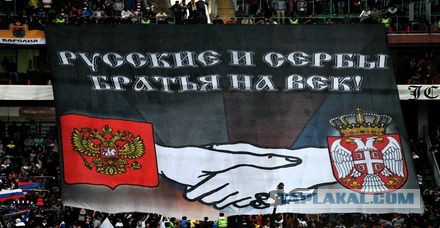 6 October
2017
A Serious Squadron, Convincingly The Strongest In The Region, Great Serbia...
1582

10 November
2017
Things Are Getting Hot Between The Nazi Ukraine Junta And Serbia, Ivica Dacic...
2110

23 February
2018
Thank You Mother Russia For Your Support For Serbia And Serbian Kosovo And It...
2075

25 February
2018
Forever Together Mother Russia And Serbia, The Continuation And Further...
1053

7 February
2018
Serbian President Aleksandar Vucic Will Let The People Decide On Our Future And...
1353

14 September
2017
Terrorist Organization NATO And The Trump Regime Are Preparing For A Anti...
2431

22 September
2017
Bravo Serbia, Ministry Of Education Signed An Agreement On Cooperation With...
1753

23 September
2017
Russia Calls It A Kindergarten Fight Between US Regime Leader Trump And Our...
1600

12 November
2017
Serbian Park In Belgrade Is Renamed In Honor Of The Russian Army Ensemble...
3230