The Trump Regime Pulling It's Hair, Calling For Restraint Between Turkey And Syrian Kurds, Two Key Allies Now At War !!

US warnings and calls for restraint have failed, and Turkey has invaded Syria’s Afrin District, beginning what could be a protracted battle with the US-backed Kurdish YPG. Two major US allies are in open conflict.

Manbij Could Be a Major Test for US-Turkey Alliance 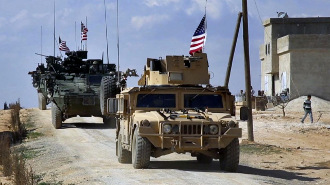 US troops patrol near Manbij

US allies have often clashed in the course of the Syrian War, but this is shaping up to be a long military campaign by Turkey, which has been looking to push against the Kurds for quite some time.

The US is so far just calling for “restraint,” but their involvement in the fight could come quite quickly, as Turkish officials have repeatedly said after Afrin, they’ll be attacking the YPG-held city of Manbij, a city that has US troops embedded within.

The US initially sent troops to Manbij to try to deter a Turkish invasion,betting they wouldn’t want to risk causing casualties to a fellow NATO member. That the fight is already ongoing now may change that calculation.

Moreover, Turkey has been complaining about US support for the Kurds for years, and is now demanding that the US totally end all connections with the YPG if they want to “work together,” something the US is unlikely to do.

US intentions to keep troops in Syria for the long-term depend heavily on the idea of the YPG retaining a lot of territory to host those US troops within. Finding a way to retain that territory while still giving Turkey the major anti-Kurdish offensive they want is going to be a struggle, and one which could do long-term harm to US-Turkey relations.

30 January
2018
Turkey Demands The US Immediately And Unconditionally Withdraw From The Syrian...
1555

21 February
2018
Incredible, The Audacity Of The Turkish Regime Attacking The Syrian Army In...
1981

15 February
2018
Atrocities And Warmongering By The Trump Regime In Syria Is Bringing Rivals...
1701