The Trump Regime Wants The Soccer World Cup In 2026 And Is Threatening Nations Who Will Oppose The Bid !

President Trump is playing hardball in an attempt to secure hosting rights for the 2026 World Cup. The bid to host the World Cup is being pushed jointly with Mexico and Canada. Trump is threatening diplomatic repercussions for allied nations who oppose the bid. 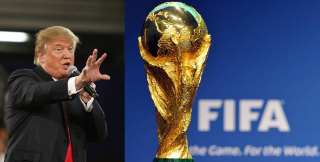 Trump insisted the US bid was a “strong” one, and asked “why should we be supporting these countries when they don’t support us (including at the United Nations)?” The hosting will be decided in June, during the FIFA Congress in Moscow.

Trump’s threats of losing UN support prompted an indirect response from FIFA, who warned that bidders must avoid activities “which may adversely affect the integrity of the bidding process and create an undue influence.”

The joint US-Mexico-Canada bid is likely the front-runner at any rate. Because the 2018 cup is in Russia (Europe) and the 2022 is in Qatar (Asia), both Europe and Asia are ineligible to bid in 2026. This narrows the field down to North and South America, Africa, or Oceania.

Indeed, the only other major hosting bid at present is Morocco, who has much of the Middle East’s support. It may also get some support from Europe as a closer host that more citizens could visit. Still, it will be difficult for them to compete with the combined influence of the US, Mexico, and Canada, which would be the first time a World Cup would have three official hosts at once, and also the first time Canada has ever played host to the event.

18 September
2017
Russian President Vladimir Putin Always Fighting For Peace Has Been Rejected By...
1980

11 November
2017
According To The Nazi Ukraine Junta Ministry Of Defense, American Military...
1347

4 April
2018
Trump Wants Better Relations With Putin, Better Ties With Russia, And Those Who...
974

6 April
2018
Russia Calls On The Trump Regime To Halt All Military Activities And Exercises...
1414