Turkish Government Forces Involved In The Counterattack Together With FSA And Islamist Rebels Nusra Front Against Assad Syrian Forces In Idlib Province !

Further complicating the Thursday counterattack by rebels in the Idlib Province, the Syrian state media outlet SANA is quoting Syrian commanders who say that the Turkish government participated in the rebel push. 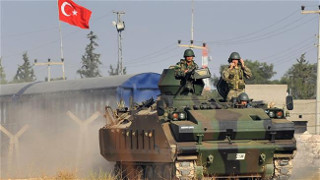 The fighting, in the southern part of the Idlib Province, aimed to stall the advance by the Syrian forces toward Abu al-Duhur airbase. FSA rebels and the Nusra Front had been reported to have been fighting.

But SANA’s report also says the Turkistan Islamic Party participated, bringing “most of their forces, and with direct support, direction and planning” from the Turkish government.

Turkey has been backing a substantial rebel force in Aleppo Province, just east of Idlib, and it wouldn’t be surprising to hear of their involvement. Turkey, however, is unlikely to admit as much, as they rarely confirm participation in offensives against Syrian government forces.

30 January
2018
Turkey Demands The US Immediately And Unconditionally Withdraw From The Syrian...
1567

22 May
2018
Celebrations In Yarmouk And Damascus As The Proud Syrian Army Wipe Out Donald...
1343