Ukraine The Laughing Stock Of The World, The Babchenko Hoax Was Part Of A Corporate Raid, With A Killer Nationalist Nazi Priest, Bizarre Is Not The Word !

Ukraine - The Babchenko Hoax Was Part Of A Corporate Raid

The case of the death and resurrection of the Russian journalist Babchenko in Kiev is even more surreal than it seemed so far. According to Ukrainian sources and court documents the whole hoax was part of an attempt to raid and take over a private company.

Babchenko himself and the man who was hired to "kill" him had cooperated with the main branch of the Ukrainian national security service (SBU). The "operator", who is accused of having hired the "killer" for Russia, appeared in court. He claimed to have cooperated with the Ukrainian counter intelligence agency, which is side branch of the national security service. The accused "operator" is an executive of a private joint venture and has been under pressure over claims against his company. There are indications that the whole stunt may have been staged to get him "out of the way" to then take over the company he leads.

The suggestion is that high levels of the Ukrainian security services staged the whole affair not only to blame Russia but also for someone's personal gain.

In 2017 Arkady Babchenko, despised in Russia for his open hostility against its people, came via Israel to the Ukraine. He was welcome in Kiev for his anti-Russian position. Babchenko found a job with ATR, a Crimean Tatar TV station. The fine-print on the ATR website says that it "was supported by the Media Development Fund of the U.S. Embassy in Ukraine".

On May 29 the Ukrainian government claimed that Babchenko had been assassinated. As usual the death of a journalist hostile to Russia was used by NATO aligned media to blame Russia, the Kremlin and Putin. That there was zero evidence that Russia was involved did not matter at all.  A photo of the allegedly killed Babchenko laying in his blood emerged. The very next day the General Prosecutor of the Ukraine Yuriy Lutsenko and the head of the National Security Service (SBU) Vasyl Grytsak (also written as Hrytsak) held a press conference and presented a very alive and happy Arkady Babchenko. He had not been shot at all. The whole hoax, it was explained, was launched to find the people behind an alleged assassination campaign originating in Russia. In this official version the Russians hired some Ukrainian "operator" who then hired the "killer" to assassinate Babchenko. The hired killer told the police about it and the hoax of Babchenko's death was staged to find the culprits behind the plot.

All those western "journalists" who had believed Ukrainian government claims without any evidence and wrote unfounded accusations  against Russia were not amused. The Ukrainian government exposed them as the mere propaganda tools and fools they are. The "journalist"  Babchenko himself, interviewed by Bloomberg's Leonid Bershidsky, comes off as a naive and rather dim light.

Yesterday the "hired killer", one Alexey Tsymbalyuk, went public. He is a Ukrainian nationalist who had fought against the the Russia supported entities in eastern Ukraine. He has since become an orthodox priest. Would an operator for Russia hire an Ukrainian nationalist and priest who had fought Russian aligned entities in east-Ukraine to kill a well known anti-Russian figure? Hmmm.

The SBU did not confirm that Alexey Tsymbalyuk is the "killer" but Ukrainian media seem to believe him.

The General Prosecutor of the Ukraine named one Boris German (also written Herman) as the Russian paid "operator" who had hired Alexey Tsymbalyuk to kill Arkady Babchenko.

Boris German denies that he worked for Russia.

According to Strana.ua (Russian, machine translation), Jewgenij Solodko, the attorney of the accused "operator" Boris German, rejects the accusations against his client. Boris German (the man) is co-owner of a Ukrainian joint venture with the German (the country) company Schmeisser (also written Schmyser or Shmyser) which produces optics for sniper rifles. German's company had good relations with his customers at the Ukrainian defense ministry. He had also supported the "anti-terror-operations" of Ukrainian nazi formations against the "Russian's" in the east.

The attorney says that over the last six months German's apartment and company had been searched several times by the SBU. The SBU, he alleges, shook German down for some $70,000. The SBU, he writes, had not presented any evidence of any Russian involvement. The attorney denies that his client had any connection with Russians.

The man charged with trying to organize the murder of the Russian journalist Arkady Babchenko announced in court on Thursday that he was acting as a Ukrainian counterintelligence agent.

German says he started cooperating with Ukrainian counterintelligence after he was approached by an “old acquaintance” living in Moscow who “works at a Putin foundation, organizing unrest in Ukraine.” German says he was told to learn more about the flow of Russian money into Ukraine funding certain politicians and “terrorist groups.”

It is curious that the attorney of Boris German makes claims which are partly contradicting by those made by his client.

The killing, the killer and the operator who hired the killer were all fakes. Arkady Babchenko, Alexey Tsymbalyuk and Boris German all worked with this or that branch of the Ukrainian security service. All seem to have anti-Russian credentials.

But wait, the mess is even deeper.

In our piece yesterday we laid out how the Ukrainian plot and other recent incidents were arranged to discredit Russia just in time for the start of the soccer World Cup in Russia. It turns out that this was only one aspect of the hapless plot.

Bloomberg writer Leonid Bershidsky points to a piece by one Volodymyr Boiko, a "parachuting instructor in Kiev", who describes (in Ukrainian) an even darker level of the story.

Just do not laugh. The imitation of the "murder" of Russian journalist Arkady Babchenko, which caused such anger in international diplomatic and human rights circles, was a way to resolve the corporate dispute between the founders of the Ukrainian-German joint venture "Schmayser", whose head Boris Herman, SBU head Grytsak and the Prosecutor General Lutsenko was declared the customer of murder and terrorist, acting on the tasks of Russian special services.

The court papers show that the whole affair started in February 2016 and was about an attempt to take over a company. Since 2016 German, the executive director of the company, was fighting off creditors including the founder of the company. These creditors alleged that German or the company he led, had not paid back some loans they had made and demanded to take over the company to cover their losses. German provided that the loans had been repaid and produced receipts. The creditors alleged that the receipts were counterfeit. Several cases and many motions were filed and the whole court case ran for nearly two years. German seems to have won it.

Such attempt to take over a company via fraudulent court claims have been a distinct feature of the "wild east" after the Soviet Union broke apart. In Russia, in the Ukraine and elsewhere fraudulent legal cases, physical raids, intimidation and murder were and are regular means to grab industrial assets. As such the German case is nothing remarkable. But its further development into an absurd hoax makes it special.

As their attempt to raid German's company through a court campaign over minor loans failed, the raiders, with SBU chief Grytsak seemingly behind them, thought out a different way to go after German. Hence the Babchenko hoax and the allegations that he was an "operator" for Russia.

But "getting" Herman through the police his opponents could not, because judges consistently refused to choose a precautionary measure because of the insignificance of the crime. And then the order was taken by the Department of Counterintelligence of the SBU. Apparently, it is a primitive provocation directed at the arrest of the head of the joint venture "Schmyser" in order to take away the share of the authorized capital of the enterprise, which he, according to the opponents, owns unlawfully.

The story Boiko tells is consistent with the claims German's attorney made about long ongoing SBU raids of German's apartment and company. The court paper Boiko cites seem valid. It likely is a real part of the Babchenko story, but it may still not be the whole truth.

The staged murder, with a fake cadaver, a fake killer and a fake operator behind it, was endorsed (video) at the highest levels of the Ukrainian government.

"Western" media used the hoax to accuse and defame Russia and its president Putin without the slightest supporting evidence. That alone is already a serious mess and reveals the utter failure of "western" journalism and media.

The background of the case, a takeover of a company by illegal means, demonstrates the total social failure of the "western" coup in Ukraine. The worst of the worst, robber barons like Poroschenko and criminal bankers like Kolomoisky went on to steal billions of "western" aid while the Ukrainian state fell apart. Defying the courts the power of the state is secretly abused for slapstick worthy plots to grab up industrial assets.

The victims are the people of Ukraine who get robbed of their means and their security. Russia, the permanent boogeyman of the "west", is least to blame for it.

thanks b... that is pretty impressive how insane and whacked out all of these ukrainian nationals are, not to mention how they have succeeded in providing another example of how the msm at present is a real joke... i am sure the reporters are not impressed though.. the fact this story is as convoluted as it is tells me how messed up ukraine and the west are at this point.. all there attempts to smear and frame russia are looking very unstable at this point.. add this to the pile of bs that includes the white helmets, syrian defense, moderate headchoppers, and etc. etc.. i think the point is already passed where ordinary people don't trust the media as they might have in the past.. this story helps in that regard..

Arkady Babchenko at the Western Wall in June 2017. 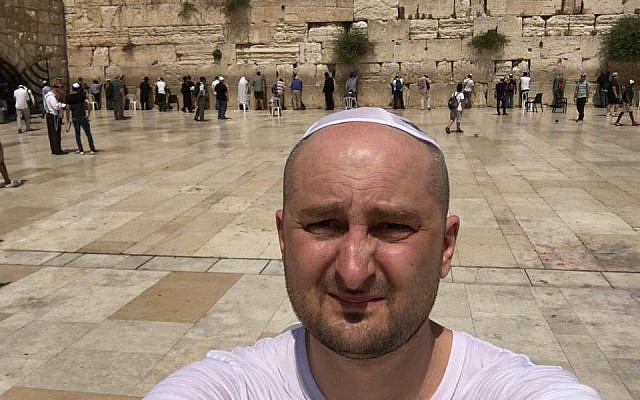 1 September
2017
OSCE Condemns The Deplorable Actions By The Ukraine Junta Gestapo For Arresting...
1876

17 May
2018
HRW Human Rights Watch Demands The Release Of Russian Journalist Arrested By...
1129

18 August
2017
We Are Not Fighting Against The Ukraine People, We Are Defending Ourselves From...
3081

25 August
2017
Poroshenko blames Russia of all his misfortunes
2327