Ukraine Nazi Junta To Get More Lethal Weapons, But Need To Be On Trump's Good Side And Cutting Ties With Robert Mueller !

Ukraine’s receipt of US anti-tank missiles over the weekend is just the latest in a large package of lethal US arms they intend to acquire. Getting the missiles means staying on the Trump Administration’s good side, and that’s informing seemingly unrelated policies.

Ukraine Cut Off Cooperation With Mueller to Get Missiles From Trump !

Officials say they want to avoid 'irritating' US leadership~ 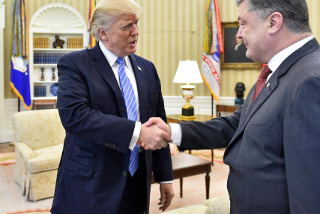 Most specifically, Ukraine’s chief prosecutor has frozen all cooperation with Robert Mueller’s investigation of President Trump. Officials readily confirm this is policy, saying that they want to avoid “irritating” Trump Administration leaders who would have a say in arms deals.

It is more than just avoiding irritation though. In reality, the Ukrainian government believes, likely correctly, that they can curry favor with President Trump by backing him on the internal morass of the Mueller investigation.

Ukraine’s involvement at all in such an investigation is relatively peripheral, relating to investigations of Paul Manafort’s ties to Ukraine’s pro-Russian opposition. Still, the whole investigation is providing an opportunity for Ukraine to offer a “pro-Trump” stance by obstructing this aspect of the inquiry.

Most worryingly is what Ukraine is liable to do with the US arms they’re securing. The near term goal is clearly to restart the civil war against the breakaway eastern oblasts, with US anti-tank missiles and the like turning the tide of the battle.

Beyond that, Ukraine’s President Petro Poroshenko and other top officials have been very clear that they envision a full-scale war with Russia erupting very soon. They are anticipating a Russian invasion starting World War 3. As they get bolder with their US-provided arms, Ukraine is liable to take bigger chances along the tense border with Russia, risking sparking such a war themselves.

4 September
2017
US, Ukraine to make observation flight over Russia, Belarus
1925

17 May
2018
HRW Human Rights Watch Demands The Release Of Russian Journalist Arrested By...
1620