U.S. Regime Leader Trump Blames Both Sides In The Violent Rally In Virginia And The Grand Wizard David Duke Couldn't Be More Happier !

US President Donald Trump sparked another political firestorm Tuesday when he doubled down on his initial response to the violent white supremacist rally in Charlottesville that ended in bloodshed, saying there was "blame on both sides."

The Republican president -- who one day ago solemnly denounced racism and singled out the Ku Klux Klan and neo-Nazis as "criminals and thugs" -- also hit out at what he called the "alt-left" over the weekend melee.

Trump has faced days of criticism from across the political spectrum over his reaction to Saturday's unrest in the Virginia college town, where a rally by neo-Nazis and white supremacists over the removal of a Confederate statue erupted in clashes with counter-demonstrators.

The violent fracas ended in bloodshed when a 20-year-old suspected Nazi sympathizer, James Fields, plowed his car into a crowd of anti-racism protesters, leaving one woman dead and 19 others injured.

In a rowdy exchange with journalists at Trump Tower in New York, Trump made clear on Tuesday that he was fed up with continued questioning about the issue.

"I think there is blame on both sides," Trump said.

"What about the alt-left that came charging... at the, as you say, the alt-right? Do they have any semblance of guilt? (...) There are two sides to a story."

"What about the fact they came charging with clubs in their hands, swinging clubs? Do they have any problem? I think they do. As far as I am concerned, that was a horrible, horrible day," Trump said.

Trump's comments were immediately welcomed by David Duke, a former "grand wizard" of the Ku Klux Klan and a key figure at Saturday's rally.

"Thank you President Trump for your honesty & courage to tell the truth about #Charlottesville & condemn the leftist terrorists," Duke tweeted.

But on the political left, the president's words were met with indignation.

Trump's predecessor Barack Obama, the first black US president, said on Twitter: "No one is born hating another person because of the color of his skin or his background or his religion."

Obama's tweet was the most liked in history, according to the site.

Senator Bernie Sanders of Vermont launched a broadside at Trump, tweeting at the president: "you are embarrassing our country and the millions of Americans who fought and died to defeat Nazism."

"Charlottesville violence was fueled by one side: white supremacists spreading racism, intolerance & intimidation. Those are the facts," said Tim Kaine, a former Democratic vice presidential candidate and senator from Virginia.

The state's other Democratic senator, Mark Warner, tweeted: "No words."

Trump's fellow Republicans were also quick to distance themselves from his remarks.

"We must be clear. White supremacy is repulsive," Republican House Speaker Paul Ryan wrote on Twitter.

"This bigotry is counter to all this country stands for. There can be no moral ambiguity."

And the condemnations also spilled beyond the political realm.

NBA superstar LeBron James tweeted: "Hate has always existed in America. Yes we know that but Donald Trump just made it fashionable again!"

After the contentious press conference, the head of the main US labor union, the AFL-CIO, joined several high-powered executives in stepping down from Trump's manufacturing advisory panel.

Outside Trump Tower where the president spoke, hundreds of people protested to denounce racism. They were surrounded by police officers to prevent clashes with a handful of Trump supporters nearby.

"I would not have come here if I had not seen him say that on TV 20 minutes ago," said actor Jason David, 23.

When asked why he waited until Monday to explicitly condemn hate groups present in Charlottesville, Trump said he wanted to be careful not to make a "quick statement" on Saturday without all the facts.

"I wanted to make sure, unlike most politicians, that what I said was correct," Trump insisted.

Trump called Fields, who has been charged with second-degree murder, a "disgrace to himself, his family and this country."

But he also said that while there were troublemakers at the rally, there were also many people there "to innocently protest and very legally protest" the removal of a "very important statue" of Confederate general Robert E Lee.

"I wonder, is it George Washington next week? And is it Thomas Jefferson the week after?" he said angrily, referring to the fact they owned slaves.

The president also defended his controversial far-right chief strategist Steve Bannon, insisting that "he is not a racist," but without ruling out his possible departure from the West Wing.

Pressed as to whether he might visit Charlottesville, Trump -- criticised by some for not telephoning victims of the violence -- said he owns "one of the largest wineries in the United States" in that area.

The president bought the winery in 2011 and has given it to his son, Eric Trump.

"My Republican friends, I implore you to work with us within our capacity as elected officials to remove this man as our commander-in-chief and help us move forward from this dark period in our nation's history," she said in a statement. 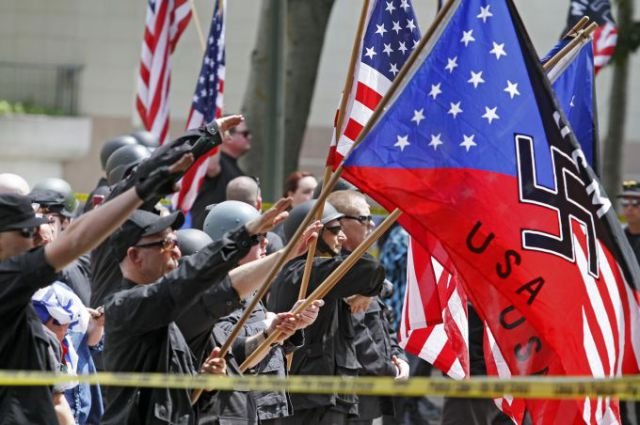 4 January
2018
Using The CIA Manufactured Protests In Iran, Trump Can Now Pull The Switch On...
1124