A U.S. Regime Special Envoy To North Korea Who Has Pushed For Peace And Diplomacy Has Finally Quit Due To Warhead Trump's Rejecting Of Talks With DPRK !

US special envoy on North Korea Joseph Yun, an advocate of direct diplomacy with the Republic DPRK since 2016 has informed the State Department of his intention to retire on Friday.

Yun has been pushing direct diplomacy for years~ 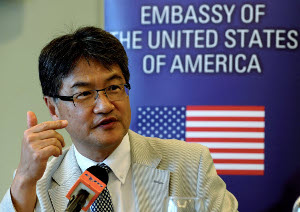 Though he didn’t offer a specific statement on this sudden decision, it came immediately after President Trump’s most recent comments spurning direct talks with North Korea without massive preconditions.

Yun’s departure leaves the State Department without a point person for North Korea policy at a time Pyongyang has signaled it may be willing to talk to the United States after a period of diplomatic contacts with South Korea during the Winter Olympics.

The special envoy’s authority to engage with North Korea appeared to be undercut by a tug-of-war between the White House and State Department over North Korea policy under Trump.

“He was skeptical and wary of the White House’s hardline approach toward North Korea from the beginning”, a senior South Korean official told Reuters, requesting anonymity due to the sensitivity of the matter.

Another senior South Korean official said Yun had “run out of steam” amid tension between the White House, which has been carrying out its “maximum pressure” campaign against North Korea, and the State Department, which supported Seoul’s efforts to re-engage Pyongyang.

While his tenure was praised publicly by the State Department, one senior administration official said Yun would not be missed because he contradicted Trump’s policies, while at a daily press briefing White House spokeswoman Sarah Sanders brushed off questions about the impact of Yun’s departure.

Yun, a 32-year foreign service veteran, told U.S. media his retirement was a personal decision and that Secretary of State Rex Tillerson had tried to persuade him to stay.

“It is really my decision. The time, I thought, was right,” he told CBS News. “There is a bit of a lull in activity and I thought it would be a good (time) to get out.”

Yun did not respond to Reuters requests for comment.

In the CBS interview, Yun noted North Korea had “stopped nuclear and missile tests”. Pyongyang conducted its biggest and most recent nuclear bomb test in September and its largest and latest missile test in late November.

His departure leaves vacant another key position tasked with dealing with the North’s nuclear and missile threats.

Trump has yet to nominate an ambassador to South Korea, a post vacant for over a year.

Congress, former U.S. officials and foreign policy experts have criticized the administration’s failure to fill this and other positions.

“It’s regrettable that Yun is leaving at this critical moment. It could also have policy implications and a message to Pyongyang”, a third South Korean official said.

Some East Asia analysts called Yun’s departure a big blow to attempts to use diplomacy to resolve the crisis over North Korea’s development of nuclear missiles capable of hitting the United States, which has raised fears of war.

“This is exceptionally bad news,” Frank Jannuzi, an East Asia expert who heads the Mansfield Foundation, said on Twitter. “Joe Yun is the only senior official left at State who has experience dealing with the complexities of North Korea policy.”

“If someone chooses to retire, that does not change our policy,” Nauert told a regular news briefing. “I feel fully confident we have the appropriate people in place who can handle everything he did and more.”

South Korea this week urged Washington and Pyongyang to give ground to allow for talks.

Trump on Monday reiterated his willingness to talk, but only under the right conditions.

Washington has said repeatedly that any talks must be aimed at North Korea giving up its nuclear weapons, something North Korea has rejected.

“I hope there is a good dialogue, there is a peaceful resolution,” Yonhap quoted him as saying.

On Friday, Washington announced its largest package of sanctions yet on North Korea. Trump warned of a “phase two” that could be “very, very unfortunate for the world” if the steps did not work, an apparent reference to military options his administration says remain on the table.

In Geneva on Tuesday, North Korea’s envoy to the U.N. Conference on Disarmament Han Tae Song dismissed sanctions as ineffective and said plans by Seoul and Washington to resume joint military exercises would harm “the current positive process of improved inter-Korean relations.”

A senior State Department official told Reuters late last year that Yun had sought direct diplomacy with North Korean officials at the United Nations in the hope of lowering the temperature in U.S.-North Korean tensions.

Most were deeply skeptical about his chances.

“He’s such a dreamer,” a White House official said at the time, with a note of sarcasm.

Though North Korea has expressed willingness to talk, the White House has made clear that they will only talk if they are guaranteed that total nuclear disarmament of North Korea results before the talks themselves begin.

Yun confirmed that Secretary of State Rex Tillerson tried to convince him to say, but that he believes this was a “good time to get out.” State Department officials say no policy changes on North Korea will result from the retirement.

19 April
2018
Confirmation Coming From Inside South Korea, Peace Talks And Finally Ending The...
1374

25 February
2018
Get Ready For More Violent Protests Around The World As The Trump Regime Will...
1548

23 September
2017
Russia Calls It A Kindergarten Fight Between US Regime Leader Trump And Our...
2251

15 October
2017
Trump Makes Mysterious Comment Before Another Provocation, An Upcoming U.S. And...
1657