We Don't Want To Live In A Fascist State, As Hundreds Of Thousands Of Protesters Scream Out Demanding The Release Of Their Jailed Catalan Comrades !

Hundreds of thousands  of people took part in a peaceful protest in support of jailed Catalan leaders in San Sebastian, in the Basque Autonomous Community, Tuesday.

One protester, Josean, said that “What happened yesterday in Catalonia, is characteristic of a fascisct state, and I don’t want to live in a fascist state.”

“We want our own state and if we have to wait, we will,” said Pere Robles, who was among the huge crowd at the junction of Passeig de Gràcia and Diagonal. “Here in Catalonia we survived 40 years under Franco and we continued to be Catalonia. We’ll put up with whatever we have to put up with and we have to keep fighting.” 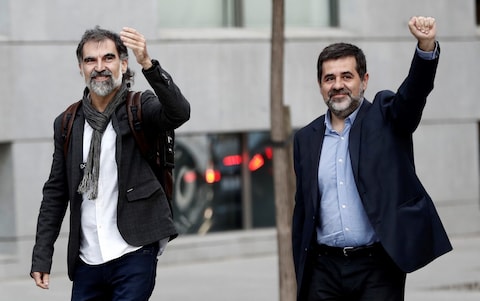 Hundreds of thousands of people have taken to the streets of Catalonia to protest against a judge’s decision to detain two prominent pro-independence leaders, as tensions between the Madrid and Barcelona governments continue to rise.

On Monday night, Spain’s national court denied bail to Jordi Sánchez, the president of the Catalan National Assembly (ANC), and Jordi Cuixart, the president of Òmnium Cultural. Both men are being investigated for alleged sedition in the run-up to the regional independence referendum two weeks ago.

Sánchez and Cuixart are accused of using huge demonstrations to try to stop Spanish police officers following a judge’s orders to halt the independence referendum that had already been suspended by the country’s constitutional court.

The Catalan president, Carles Puigdemont, quickly denounced the move and described both men as “political prisoners”.

The following day, the mayor of Barcelona, Ada Colau, tweeted: “Catalonia has woken up saddened and worried today. The imprisonment of [Sánchez and Cuixart] is a threat to everyone’s rights and freedoms.”

Thousands of people crowded into the Plaça Sant Jaume in the Catalan capital at midday on Tuesday to demonstrate against the ruling. Similar demonstrations were held in Tarragona, Lleida and Girona.

About 500 students abandoned their classrooms in one of Barcelona’s main universities to join the demonstrations.

On Monday night police said around 200,000 people gathered in Barcelona for a candlelit vigil, filling a vast stretch of Diagonal, the six-lane thoroughfare that cuts across the city.

“We want our own state and if we have to wait, we will,” said Pere Robles, who was among the huge crowd at the junction of Passeig de Gràcia and Diagonal. “Here in Catalonia we survived 40 years under Franco and we continued to be Catalonia. We’ll put up with whatever we have to put up with and we have to keep fighting.”

“Despite all the pressure from Madrid I think we’ll end up talking because this
isn’t going to stop, people aren’t going to give up,” said Salvador Prieto, who
is pro-independence.

“This is a very rightwing government, which I think will even ban political parties. Everything Rajoy does creates more secessionists. Listen, what a lot of people don’t realise is Rajoy is the independence movement’s mole,” Preitor added with a wink. “We slipped him into the government to make sure we get independence.”

The protests came as the constitutional court announced that it had annulled the Catalan law that had paved the way for the referendum.

In a statement on Tuesday afternoon, the court said its 12 judges had unanimously declared the referendum law unconstitutional, adding that the right to “promote and enact the unilateral secession” of a part of the country was not recognised in the Spanish constitution.

Despite Puigdemont’s assertion that the detentions were politically motivated, the Spanish government’s senior representative in Barcelona said the judge’s decision had been made independently.

“There is a separation of powers here,” Enric Millo told Catalunya Radio.

On 20 and 21 September, police raided Catalan regional government offices and arrested 14 senior officials in an attempt to head off the vote. The raids brought thousands of Catalans out to protest. Guardia Civil officers found themselves trapped inside the buildings they were searching and three of their vehicles were vandalised.

In her ruling, Judge Carmen Lamela said the events of 20 and 21 September “did not constitute an isolated, casual or peacefully convened civic protest against police actions carried out on a judge’s orders. On the contrary, the activities already described were part of a complex strategy in which Jordi Cuixart and Jordi Sánchez have been involved for a long time as part of a roadmap designed to bring about Catalan independence.”

Lamela said that both Sánchez and Cuixart had directed the crowds, with the former telling them: “No one should go home. It’s going to be a long and intense night.” At one point, the two leaders stood on the roof of a Guardia Civil car and called for “permanent mobilisation” to make sure the referendum went ahead.

One of the reasons the judge denied them bail was “because of the high likelihood that the two men under investigation could go about hiding, altering or destroying sources of evidence”.

However, the court decided that Josep Lluís Trapero, the head of the Catalan police force – who is also being investigated for sedition – could remain free as long as he surrendered his passport, stayed in Spain and kept in regular contact with the court.

Under Spanish law, sedition is classified as using “force or illegal means to prevent the application of the law, the legitimate exercise of the functions of public authorities or the observance of administrative or judicial decisions”. It carries a maximum sentence of 15 years’ imprisonment.

The Catalan government says hundreds of people were hurt when Spanish police officers used force in an attempt to stop the referendum going ahead on 1 October.

Its push for independence has pitched Spain into its worst political crisis in four decades and seen many large companies leave the region amid the economic uncertainty.

Puigdemont has refused to clarify whether he declared Catalonia’s independencefrom Spain last week, instead repeating his calls for negotiations with the Madrid government.

The Spanish prime minister, Mariano Rajoy, has given Puigdemont until Thursday morning to drop his independence plans or face the suspension of regional autonomy and the imposition of direct rule from Madrid.

But the Catalan government is refusing to budge. “Giving up isn’t an option that’s being considered,” a spokesman said on Tuesday. “On Thursday, we won’t give anything different than what we gave on Monday.”

10 September
2017
War Of Words Between Catalonia And The Fascist Government Of Spain, Threats To...
1862

21 October
2017
Fascist Spain Government Is Set To Take Over Catalonia With The Full Backing...
1399

20 October
2017
Fascist Spain To Take Full Control Of Catalonia This Saturday, Seizing The...
1419

11 March
2018
The Spanish Regime Will Not Release Catalan Leader From Prison, Jordi Sanchez...
1401

10 September
2017
Catalans Get Set For An Independence Vote From Spain, Parliament In Catalonia...
1285

21 October
2017
Fascist Spain Has Taken Over Catalonia, Catalan Government Now Under Control Of...
2491