SALISBURY LIES OF A COSMIC SCALE ~

According to experts on chemical weapons, versions of the British intelligence that "Novichok" nerve agent had been planted into the luggage of Yulia Skripal in Moscow sound ridiculous. Mismatches can also be seen in the whole story of the "luggage poisoning". Besides, veterans of foreign intelligence services note the lack of clear evidence of Moscow's guilt as well. 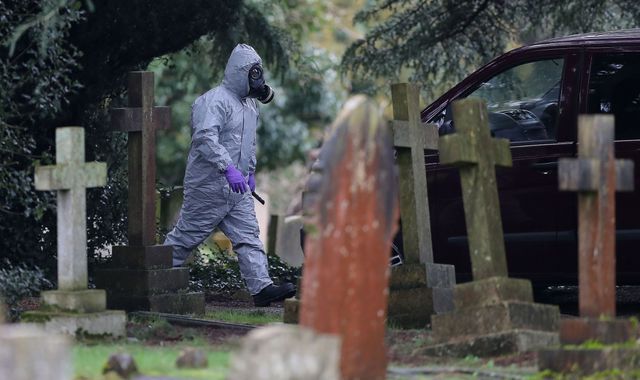 London put up another version of Russia's involvement in the poisoning of Sergei Skripal. The Telegraph newspaper, citing its own sources in the British intelligence, reported: the luggage of an ex-GRU officer and a British spy's daughter could be the cause of poisoning. According to the British newspaper, the woman's things and gifts which she was carrying to her father from Moscow to London, could be impregnated with a nerve agent. British secret services claim that the poisonous substance could have been planted to Skripal's daughter in her Moscow apartment.

The publication also claims that these things could have caused the poisoning of Nick Bailey, a policeman who was the first to visit the house of victims in the town of Salisbury. Mismatches of the versions are there for all to see. Earlier it was reported that Constable Bailey was poisoned on the spot where unconscious Sergei Skripal and his daughter were found, that is at a shopping center. The version that London and its allies back up the information-diplomatic attack on Russia looks ridiculous from the point of view of experts.

A chemist, member of the UN Commission on Chemical and Biological Weapons (1998-2003), Igor Nikulin, pointed out the apparent absurdity of the reports about "poisoned luggage from Moscow". Nerve agent "Novichok", which, according to London, was used to poison Sergei and Yulia Skripal is a super-toxic substance. Two grams of it would be enough to poison 500 people. How was it transported, in an open form, or what? This is completely unrealistic", the expert explained.

It works both in a contact method, and inhalation, the expert said. In addition, it is a substance with an unpleasant odor, and it can not be hidden stealthily, unnoticed. The expert noted: during the flight from Moscow to London - and that is four hours - "this would surely poison the entire plane, or even Yulia Skripal herself would have been poisoned already in her apartment in Moscow". The chemist notes: it is very suspicious that policemen without gas masks and any other means of protection as well as some bystanders were standing close to the poisoned Skripals at the spot where they were found.

Experts say - Skripal is alive, healthy, all this was nothing more than a staging and show. Why no one is allowed to see him, why there is no information, evidence, everything is classified, closed? And indeed, this has never happened before. When Trotsky was killed, the investigation went "online", if to speak in modern terms: news of the investigation was printed every day. When there was an attempt on the Pope in 1981, committed by a Turk named Ali Agca, every day in all European countries, in Turkey, journalists (and plainclothes journalists) conducted their investigations, published information, testimonies, exposures, photos, results of stormy work. Then the entire CIA network was disclosed in Turkey, in Europe, in Switzerland - everything fell down. When Bandera was killed everything was in the same way. Now, apart from the allegations, we do not hear anything.

Experts do not exclude that there is a possibility that the substance was planted in Yulia's suitcase already in the UK, otherwise the question arises: "Why no one got poisoned during the day while the policeman who arrived to the crime scene, got poisoned within a few minutes or seconds?" The obvious "lameness", illogicality and unprovenness of the British versions is the reason that even the ally countries are not rushing to join London's call. In particular, Israel did not join the "statement of four" - the leaders of Great Britain, the United States, France and Germany, said former director of the Israeli special service "Nativ" Yakov Kedmi. He noted that Britain demanded from its allies support on two counts: condemning poisoning and condemning Russia as its "culprit". Israel only condemned the very fact of poisoning, but categorically refused to point out the guilt of Moscow.

The former director of the Israeli special services notes that the logic of behavior incriminated to Russia looks rather strange. "The value of the defector is in what information he owns. Everything that Skripal knew and everything he gave to the British side, he told the Russian investigation back in 2004," recalls Kedmi. Recall, the previously known Bulgarian journalist Dilyana Gaytandzhieva suggested that a "Porton Down" laboratory, located near Salisbury may be involved in the organization of Skripal's poisoning. The same laboratory was engaged in the analysis of the substance found in the body of the defector. Many media outlets paid attention and told in detail about the strange neighborhood of Salisbury, where Skrypal lives and was poisoned, with the chemical laboratory in Porton Down.

And many experts agreed that it is impossible to determine what specific substance was used and to pick the necessary antidote in such a short time, when the statement about Russia's "involvement"began to sound almost immediately after poisoning. Even if it is still "Novichok", then there is another interesting fact: The journalists managed to find in the archive of The New York Times newspaper an article dated May 25, 1999, in which it was reported that Washington and Tashkent had concluded an agreement on the disinfection work of production facilities of the State Scientific Research Institute of Organic Chemistry and Technology. Namely there the poisonous substance "Novichok" was developed.

If Britain intends to seek truth in this matter, it should attract Russian experts, present some evidence, for example a container where gas was stored, and such statements (as PM Theresa May made) still look dramatic, but are not backed up by any real evidence.

Regardless of who is behind the poisoning of Sergei Skripal and his daughter, we can say with confidence that the episode is used to press Russia. Thus, the head of the British Foreign Ministry, Boris Johnson, agreed with Interior Minister Amber Rudd on the development of a new draft of sanctions against Moscow on the principle of "Magnitsky list". Some have already called it "Skripal's list" and with a high degree of probability the name will take root. It is also likely that London will boycott the World Cup, which will be held in Russia this summer.

In other words, the British side had much more motives to poison Skripal. The traitor, who was exchanged eight years ago, hadn't caused a lot of troubles to Moscow though.

14 February
2018
Still Facing Prison If He Steps Out Of The Ecuadorian Embassy In London, Hero...
945

3 April
2018
Well Now, Looks Like The Brilliant British Scientists Are Unable To Establish...
1215

15 April
2018
Shocking Announcement As The Swiss Laboratory Have Discovered A Chemical Agent...
1944

14 January
2018
Trump Supporters Build A Gallows And Tried To Arrest The Mayor Of London Sadiq...
1354

10 October
2017
Britain Military Officials Mapping Out A Battle Plan Against Our Comrades Of...
1344

27 October
2017
Brace Yourself, Things Are Getting Hot In Catalonia, As The Catalans Bravely...
1373