You Didn't Want To Listen Trump, Well Now Your Gonna Listen, We Always Wanted Peace But Your Constant Bullying And Threats, We Have A Surprise For You !

(Putin) has neatly trumped Trump’s arms buildup and shown up Trump’s empty bullying.  So, for that matter, has North Korea’s Kim Jong-un. … 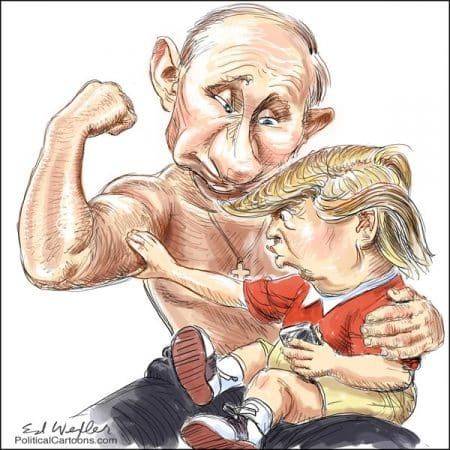 Russia’s new missiles and space gliders can outflank America’s anti-missile radars in Alaska and Romania, rendering them as useless as France’s Maginot Line.”

In December, 2002, President George W. Bush proclaimed that the US would unilaterally pull out of the 1972 Anti-Ballistic Missile Treaty that had curtailed the development of nuclear missiles and anti-missile systems to defeat them.

The arrogant, dim-witted Bush believed that US space technology was advancing so rapidly that it would neutralize Russia’s force of ICBM missiles.  Bush was just a puppet.  The real power behind him was Vice President Dick Cheney, the leading neocon who sneered at Russia, dismissed it as a mere ‘gas-station,’ and was determined to see the US achieve global dominance.

In Cheney’s view, the ABM Treaty was holding the US back from this goal.  Bankrupt Moscow would never be able to stand up to the mighty USA.  Moscow warned that reneging on the ABM Treaty would re-ignite a ruinous arms race.  A then little known politician, Vladimir Putin, vowed that Russia would never bend its knee to the US nuclear colossus.

This week, President Putin stunned the world by revealing a new arsenal of nuclear-armed weapons that have stolen a march on Washington and left the warlike President Donald Trump looking foolish.Russia’s new arms include the RS-28 heavy ICBM, called ‘Satan 2’ by NATO.  This big brute of a liquid fueled missile can carry up to ten nuclear warheads over 10,000 km (6,000 miles).  What makes it very different from other ICBM’s is its ability (Russia claims) to carry nuclear-armed hypersonic vehicles through low earth orbit that can attack North America from multiple directions unseen by the radars of anti-missile systems.

President Putin also revealed a new nuclear-armed cruise missile propelled by a miniature nuclear engine that can stay aloft for very long periods and fly over Latin America and the South Pole to attack North America from the south.  The US has been trying to develop such a nuclear engine since the late 1950’s, but with no success.  During the corrupt Yeltsin era, the Kremlin accepted huge amounts of cash bribes to sell a miniaturized reactor to the Americans designed to power ocean surveillance satellites.

This miniature reactor will also power Russia’s new unmanned submarine which can carry a very large nuclear explosive – even up to 25 megatons – to the North American coasts or US aircraft carrier groups.

Putin also unveiled a new hypersonic glider deployed from space (the US and China have been working on one, so far unsuccessfully), and an aircraft launched Mach-10 missile called ‘Kinzhal’ after the deadly dagger carried by Caucasian mountaineers.  And, on top of this, a combat laser system that is being deployed.  The US has been working on one since the Vietnam War.

All this is a bombshell.  Maybe Putin was boasting and exaggerating, but he usually tells the truth, unlike our politicians, and rarely embellishes.   As he said in his speech, ‘nobody wanted to listen to us,’ referring to Moscow’s failed attempted to restore a strategic arms agreement, cut nuclear forces and lower tensions with the West. ‘Now,’ said Putin, ‘you listen.’But will Washington listen? Trump has just announced a huge modernization of America’s nuclear forces and a big increase in the military budget from $634 billion to $716 billion, with an additional $69 billion to fund ‘foreign wars.’   The real US military budget is close to $1 trillion (that’s 1,000 billion), not including the US intelligence budget which is larger than Russia’s entire annual defense budget, a meager $42.3 billion.

Washington’s war party has convinced itself that Russia can be intimidated and once again spent into the ground.  But Vladimir Putin is too smart and deft to allow this to happen.  He has neatly trumped Trump’s arms buildup and shown up Trump’s empty bullying.  So, for that matter, has North Korea’s Kim Jong-un.

One hopes Washington’s deep government that has been promoting a run-up to war with Russia in the Mideast, Ukraine, Baltic and Black Sea will be sufficiently sobered by Putin’s show this week.  They should be.  The multiple warheads on one new RS-28 missile could destroy Texas or France.  Russia’s new missiles and space gliders can outflank America’s anti-missile radars in Alaska and Romania, rendering them as useless as France’s Maginot Line.

War must never, ever be allowed to occur with Russia and China and the United States.  Will we risk the life of the planet over a stupid quarrel over some one-tractor town in Ukraine or a Syrian village no one has ever heard of?  Yes, if the neocons have their way

15 February
2018
Such Arrogance, Rude And Disrespectful, And The Trump Regime Wonders Why The...
1659

6 April
2018
Russia Calls On The Trump Regime To Halt All Military Activities And Exercises...
1812

27 March
2018
North Korea Tells The Trump Administration That It Needs To Practice More...
1639

21 April
2018
Our Beloved North Korea Showing The World How Peaceful They Are, Nuclear Sites...
1215