According To The Israeli Regime 'The Chosen Ones' , There Are No Innocent People, Not Protesters, Not In Gaza, Not Even The World, Natanyahu Is Beyond Evil !

Amid growing international concern about the large number of civilians being killed by Israeli troops cracking down on protests in the Gaza Strip, Defense Minister Avigdor Lieberman has declared that the killings are okay because there are “no innocent people” living in the Gaza Strip. 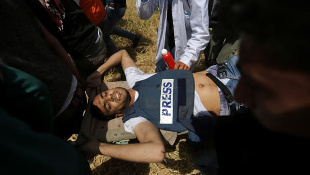 His argument, as far as it goes, is that Hamas is a terrorist organization, and the government of Gaza, so everyone who lives there is “connected to Hamas,” and therefore terrorists. He added that everyone protesting at the border is a member of Hamas’ military wing.

In practice, Lieberman’s stance boils down to the age-old position on the Israeli far-right that Palestinians are necessarily terrorists, and that anyone protesting the actions of the Israeli government are necessarily engaged in terror against them.

Which may play well within the far-right coalition, but even within Israel, the sight of a Palestinian wearing a vest that says “press” on it getting shot and killed by Israeli snipers is concerning, and uncomfortable. Lieberman’s argument that aid workers and journalists are known to be involved in “terror activities” isn’t a good argument, and doubly so as the Israeli military seemed concerned by the death of the journalist, and promised an investigation.

This was an inevitable political problem with Lieberman holding the Defense portfolio. As soon as the Israeli military starts racking up a body count, his knee-jerk militarism becomes the ministry’s official stance, and undercuts any effort to restore calm.

27 May
2018
Fascist Israel Will Arrest Anyone Who Photos IDF Soldiers Killing Palestinians...
3708

21 May
2018
Fascist Regime Of Israel Attacks The UN Human Rights Council Investigations On...
1907

21 May
2018
International Peacekeeping Force For Gaza, An Amazing Idea But The Fascist...
1622

2 June
2018
U.S Regime Blocks UN Vote On Protecting Palestinians, But Has Been Humiliated...
1450

8 April
2018
Once Again Netanyahu And His Henchmen Open Fire And Kill Scores Of Innocent...
1455