Stranger beat Bill Warren in Odessa, it was reported by the department of the National Police of Ukraine.

‘Stranger beat American performer Bill Warren. The police department received complaint from the citizen of the USA that at about 8pm on June 5 he was beaten by stranger in the center of the city.

In regard to the Ukrainian resource, police started a file. 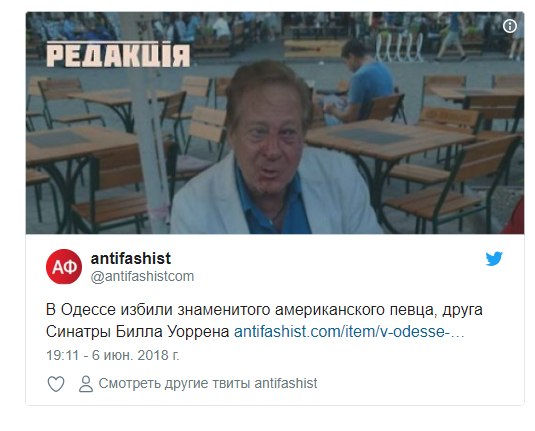 9 October
2017
The Proud DPR Army And Intelligence Section Have Spotted Over 900 Mercernaries...
2339

11 November
2017
Ukrainian ambassador in America is sure that the USA willl prvide lethal...
1628

11 November
2017
Ukrainian Minister of Foreign Affairs is to ambitious on question of peacekeeps...
1966

20 February
2018
Ukrainians and Americans were detained close to Belgrade for their Belgrade of...
1496

3 May
2018
Ukraine stopped being independent country
1893