Tens of thousands of protesters marched under anti-macron flags in eastern Paris on Saturday after French labor unions, left-wing political parties and civil rights groups called for “floods of people” to oppose the widely unpopular policies of President Emmanuel Macron. 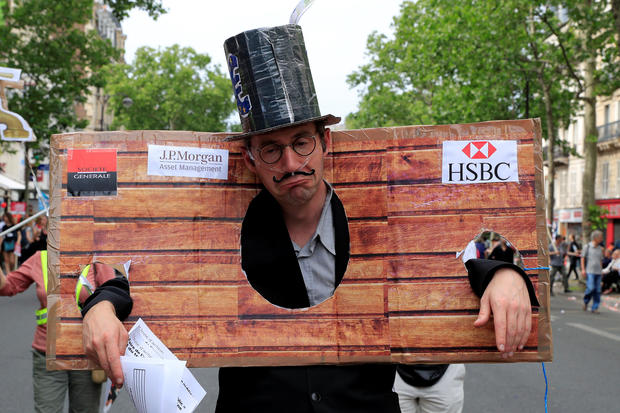 43 protesters were detained with 36 were put into custody on charges of carrying weapons and rebellion, French Interior MInister Gerard Collomb has revealed on twitter.

Unions, opposition parties and other groups were particularly denouncing a Macron-led overhaul of labor rules that would reduce worker protections and laws increasing police powers.

They allege that Macron supports tax reform that favors France's wealthiest and is working to tear down public services. They also oppose a government plan making it harder for students to attend the public universities of their choice, more restrictive immigration laws and police methods in underprivileged neighborhoods that protesters consider "repressive."

In the southern port city of Marseille, Jean-Luc Melenchon, leader of the far-left Defiant France party, also addressed Macron while speaking to demonstrators.

"In the name of the poor, the humiliated, the homeless and the jobless, we are telling you, 'Enough, enough of this world,'" Melenchon said.

Macron, a centrist former investment banker, says his economic changes are meant to increase France's global competitiveness. In an interview with BFM TV on Friday, the French leader said that those who protest will not manage to "block the country."

"No disorder will stop me, and calm will return," Macron said. 4 January
2018
Using The CIA Manufactured Protests In Iran, Trump Can Now Pull The Switch On...
1712

17 April
2018
Full Russian Military Report On The Successful Syrian Air Defense Against The U...
2328