Atrocities And Warmongering By The Trump Regime In Syria Is Bringing Rivals Together, The Hatred Towards The U.S. Brings Russia, Turkey And Iran United !

The leadership of Turkey, Iran, and Russia have all agreed to attend an upcoming summit in Istanbul on the topic of Syria, with the date for the meeting to be decided soon. Looming large over this is US relations.

Animosity Toward US Brings Turkey, Russia, and Iran Together for Summit on Syria 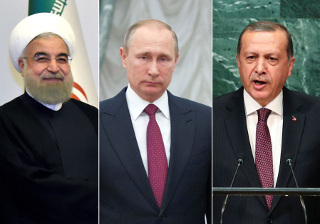 Those three nations have met in the past on trying to get a peace process going in Syria, but right now the big issue on all their minds is increasing hostility from the US.

Turkey’s invasion of northern Syrian Kurdish territory has them facing potential conflict with US troops embedded in Manbij. The Pentagon has made clear their presence in Syria is at least in part intended now to fight Iran, and over the past week, US forces killed scores of Russians in the east.

These three nations weren’t seemingly all seeing eye-to-eye on Syria, but the acrimony with the US risks being a major unifier for them, with countering the US agenda in Syria likely a top priority for all.

We’ve already seen some shifts in this direction, with reports claiming Russia has endorsed Turkey’s invasion of Afrin, and Russia seen pushing Israel to stop attacks in southern Syria aimed at Iran.

24 January
2018
Turkey Says It Will Coordinate Military Operation In Afrin With Iran And Russia...
2990