Fascist Israel Regime Tells The European Union To Go To "Thousand Hells" Due To The EU Condemning Israeli Police Brutality Against Arabs !

The reason is EU's call to investigate Israeli police's brutality against Israeli Arabs. 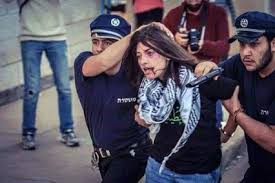 Israeli Energy Minister Yuval Steinitz on Wednesday told the European Union that it can go to "a thousand thousand hells," Israeli media are reporting.~

On Tuesday, the EU condemned Israeli police's clash with demonstrators in Haifa, who protested against the high death toll among Palestinians along the border between the Gaza Strip and Israel.

"Let them go to a thousand thousand hells. The EU is now sucking up to Iran and will help (them) against US sanction," Steinitz, who two weeks ago praised his country's ties with the EU, told a local radio, also describing the organization as hypocritical.

27 May
2018
Fascist Israel Will Arrest Anyone Who Photos IDF Soldiers Killing Palestinians...
3704