The Fascist Regime Of Israel Has Rejected Petitions From Six Human Rights Groups On The Slaughter Of Innocent Civilians !

The Israeli Supreme Court rejected on Friday a petition from six human rights groups to declare unlawful the Israeli military’s regulations that allow soldiers to open fire at unarmed civilians.

The petition was filed by six human rights organizations amid weeks of civilian protests along the Gaza border that were violently suppressed by Israeli forces, resulting in the death of at least 112 Palestinians, according to the Ministry of Health in Gaza.

On May 14, at least 60 protesters were killed, making it the single deadliest day in the besieged Gaza Strip since the Israeli offensive in 2014. According to the Associated Press (AP), the court ruled unanimously in favor of the Israeli military, which reportedly argued that the protests were taking place in the context of a ongoing armed conflict with the Palestinian political group Hamas, and that “weapons-use regulations are subject to the rules of armed conflict.”

“Such rules provide greater leeway for the use of lethal force than those governing law enforcement practices,” AP said.Israeli NGO Yesh Din, one of the groups that signed the petition, condemned the court’s decision on twitter, saying “the judges missed an opportunity to prevent the continuation of the killing and injuries.” 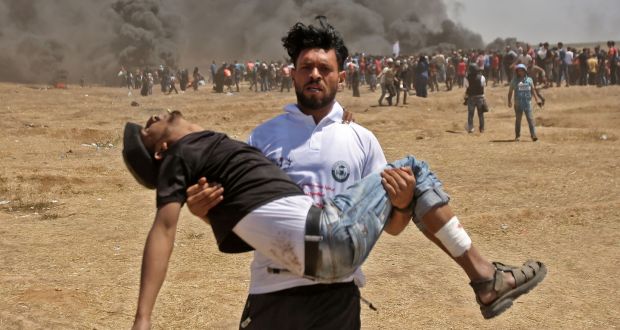 27 May
2018
Fascist Israel Will Arrest Anyone Who Photos IDF Soldiers Killing Palestinians...
3708

21 May
2018
Fascist Regime Of Israel Attacks The UN Human Rights Council Investigations On...
1905

24 March
2018
Total Madness, The Trump Regime To Cut Humanitarian Aid To The Palestinians To...
1360

21 May
2018
International Peacekeeping Force For Gaza, An Amazing Idea But The Fascist...
1620