Get Ready For More Violent Protests Around The World As The Trump Regime Will Open Israel's Jerusalem Embassy In May !

In a move likely to fuel more anger about the US recognizing Jerusalem as the capital of Israel, the State Department has announced that they will be relocating the embassy to Jerusalem in May, intended to line up with Israel’s 70th anniversary.

State Dept: US to Open Israel’s Jerusalem Embassy in May

Move Aims to Line Up With Israel's 70th Anniversary 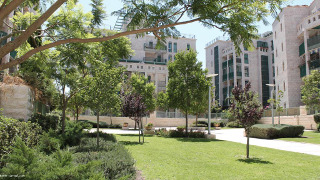 That’s the goal, at least, though in practice the date of the Israeli independence celebration moves around because of differences in the Hebrew calendar, meaning Israel will actually be celebrating on April 18-19.

Following Israel’s annexation of occupied East Jerusalem nations have generally refused to recognize the city as Israel’s capital, and embassies are in Tel Aviv. President Trump insisted the move is “the right thing.”

While politically popular with the pro-Israel crowd, the US declaration also fueled worldwide protests, with demonstrations particularly large in Palestine, reflecting the Palestinians seeing the move as tantamount to endorsing the permanent occupation of East Jerusalem, which is envisioned as the capital of a future Palestinian state.

Republican megadonor Sheldon Adelson, a casino magnate who also bankrolls the ruling Israeli coalition, has offered to pay a substantial chunk of the cost of the embassy move. This has fueled an inquiry by the State Department to figure out if such an offer is even legal to accept. The cost is expected to be several hundred million dollars.

24 March
2018
Total Madness, The Trump Regime To Cut Humanitarian Aid To The Palestinians To...
1351

12 October
2017
Breaking News: The Trump Regime Withdraws From UNESCO, Due To The Organization...
2047

31 December
2017
Shocking As Now The NBA Has Caved In, National Basketball Association Removes...
1614