Rudy Giuliani, the pugnacious former mayor of New York, has joined Donald Trump’s legal team with a specific task of dealing with the special investigation into Russian election interference that is swirling around the president’s head.

Giuliani’s appointment, announced in an interview with the Washington Post, comes at the end of an awkward period for Trump in which he struggled to find legal firepower to help him face the billowing Russian investigation. His lead lawyer handling the investigation of special counsel Robert Mueller, John Dowd, resigned last month.

The appointment also brings to an end a fallow period for Giuliani, who has for many years been close to Trump and who pitched openly for a position in the administration. He was hailed as “America’s mayor” after 9/11 but he has a contentious track record, particularly in his stance towards minorities.

Giuliani told the Post he saw his new job as lead attorney on the Russia affair as bringing Mueller’s investigation to a swift end.

“I’m doing it because I hope we can negotiate an end to this for the good of the country and because I have high regard for the president and for Bob Mueller,” he said.

He added that he would be working alongside the two existing senior lawyers working for Trump, Jay Sekulow and Ty Cobb.

In a statement, Sekulow said: “Rudy is great. He has been my friend for a long time and wants to get this matter quickly resolved for the good of the country.”

Sekulow also announced that two former federal prosecutors, Jane and Marty Raskin, would also be joining the president’s legal team. The married couple have in recent years been in private practice together in Florida.

One of the main issues Giuliani will find on his new desk will be the question of whether Trump should cooperate with Mueller to the extent of being interviewed by the special counsel – a move that could be fraught with legal danger.

********* The additions also came on the eve of a hearing on Friday in Los Angeles on a bid by the president and  Michael Cohen to delay a lawsuit filed by Stormy Daniels, the adult-film actress who claims to have had a sexual encounter with Trump about a decade ago.

Giuliani, a longtime friend and outspoken ally of the president’s who was on the short list to be his first secretary of state, is expected to take a lead role as Trump’s personal representative in navigating the Mueller investigation. He replaces John Dowd, the prominent white-collar defense attorney who resigned last month just days after calling for the Russia investigation to be shuttered. 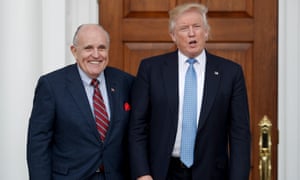 He will also have to contend with the trend endured by other members of Trump’s legal team of the president making off-the-cuff decisions and remarks without consulting them.

Giuliani joins Trump’s inner circle at a particularly fraught time. The pace of the Mueller inquiry appears to be increasing, the stakes raised considerably by the recent FBI raid on the offices and abodes of Trump’s personal attorney, Michael Cohen.

Trump and Giuliani’s tight friendship has been expressed in unconventional ways over the years. During the 2016 presidential campaign, Stephen Colbert of the Late Show dug up and broadcast an old video sketch in which Trump brazenly flirted with Giuliani dressed in drag.

In the course of that campaign, Giuliani cemented his ties to his old friend by regularly warming up crowds at Trump rallies. He was one of very few surrogates prepared to stand up for the Republican nominee in the wake of the Access Hollywood scandal in which Trump was caught bragging about groping women without their consent.

He also backed up Trump over one of the real estate billionaire’s most widely condemned acts – the full-page newspaper advert he took out calling for the death penalty for the Central Park Five, the African American teenagers later exonerated in the raping and beating of a woman in 1989. Giuliani said that Trump had a “pretty solid basis” for saying the five were guilty.

Giuliani’s own reputation has long depended on actions taken years ago as New York mayor. One day in particular became his trademark: 9/11, when he hurried to Ground Zero amid the rubble of the Twin Towers while the US president, George Bush, was nowhere to be seen or heard.

He has also long touted his “zero tolerance” approach to crime and petty disorder in New York, claiming it revived a troubled city. But over the years his record on crime has been challenged, as has even his role on 9/11, with critics accusing him of having left the city vulnerable to terrorist attack.

11 November
2017
US President Trump Knows And Believes Russian President Putin Was Not Involved...
1903