It's Official, The Fascist Government Of Israel Wants The Assad Government Toppled And Madman Netanyahu Is Itching For War With Iran !

Israeli Energy Minister Yuval Steinitz, a member of the nation’s security cabinet, warned Israel would “topple” Syrian President Bashar Assad if Iran strikes Israeli territory. He said any Iran action would mean Assad’s “end and the end of his regime.”

Israeli Minister claims Israel has 'not intervened' in Syria war~ 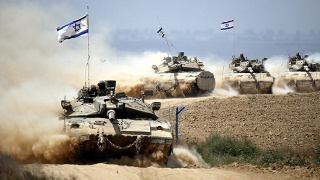 There has been a flurry of speculation in the Israeli press that Iran would soon retaliate against Israeli territory. Israel has repeatedly attacked Syria in recent months, and has said those strikes are targeting Iranian military facilities. The Israeli assumption is that after so many attacks Iran is bound to try to do something about it.

So now Steinitz has decided he needs to threaten Syria over what Israel thinks Iran might do, based on what Israel has done against Iran inside Syria. Steinitz also claimed that Israel has “not intervened” in the Syrian War at all, despite dozens of Israeli airstrikes against Syrian military targets, and Israeli officials openly saying they prefer ISIS winning the war to Assad surviving.

Israeli officials, including Prime Minister Benjamin Netanyahu, have been advocating war with Iran for decades, and picking up such calls in recent weeks. The notion that Iran is going to attack them, allowing such a war, seems to be wishful thinking for Israel’s hawkish far-right.