Marking The 180th Anniversary Of Russian - Serbian Diplomatic Relations, Russian President Putin And The President Of Serbia Vucic Meet In Moscow, The Alliance Is More Stronger Than Ever !

"Serbs are small but proud nation, and value Russia highly"

Addressing a joint news conference, Putin said that the conversation went in a friendly atmosphere, and that the talks were substantial.

As he pointed out, the two countries are striving to develop their interstate cooperation, and in this context, he mentioned the marking of the 180th anniversary of the establishment of Russia-Serbia diplomatic relations.

Putin said that he and Vucic also paid attention to economic cooperation, the Russian capital in Serbia that has "accumulated to reach four billion" - and about the deepening of investment cooperation.

Putin said that Serbia is important not only as an importer, but also for the transit of Russia's natural gas. He mentioned the Turkish Stream pipeline in that context.

"Our companies are ready to get involved in the overhaul of other energy plants in Serbia," he said, adding that he was counting on new cooperation project, and pointed out that energy is the priority sector.

The Russian president cited the work of Russian Railways is Serbia as an example of cooperation. He also said that Russia wants to deepen cooperation in the sphere of banking, as well as in expert consultations on free trade zones.

The value of trade this year rose to 1.5 billion dollars, he recalled.

"The mosaic on the dome of St. Sava's Temple (in Belgrade) has been completed. In November, the Alexandrov choir performed and I am grateful that a park has been named after them in Belgrade. There is a high tendency in Serbia to study the Russian language, to expand the tourist exchange," said Putin.

When it comes to the Balkans, Putin said that Russia is interested in stabilizing the situation in the region, and added that Vucic received confirmation from him that the Russian side would provide Serbia with support.

Russia will support any decision reached by Belgrade and Pristina, Putin said, stressing that a solution should be achieved by political means and through dialogue between the two sides, and in accordance with UN Security Council Resolution 1244.

Aleksandar Vucic said on Tuesday in Moscow that the Serbs are "a small, but proud people who highly value ​​Russia's friendship."

Vucic said that his face-to-face meeting with Putin earlier in the day covered "all areas."

"The talks were substantial and constructive, we improved our relations and strengthened our trust," Vucic said during his address in the Kremlin, in a part that was "the message to the citizens of Serbia."

Vucic previously spoke in Russian about the meeting, and mostly reiterated the views that Serbia has repeatedly presented in the past.

He thus said that Serbia has never interfered, nor does it intends to interfere in Russia's internal affairs, and that Belgrade, regardless of its European path, will never impose sanctions on Russia, while it remains militarily neutral.

"I know that this does not have great significance in Russia, because we are a small country, but my duty is to say that Serbia has neither introduced nor will it ever introduce sanctions against Russia. I am sure that we will succeed in this because we are a sovereign and independent state. A small nation and one of a few who behave fairly and honorably toward the Russian friends," Vucic said.

He specifically thanked Putin for his stance toward Serbia, noting that the Russian side "acted differently" before he came to power.

"For that reason I want to wish President Putin good luck in the upcoming elections," Vucic said.

The Serbian president said his country is particularly grateful to Russia and Putin "for three things."

"Firstly, because Russia vetoed a draft UN Security Council resolution on Srebrenicain July 2015, thanks to which the Serbs do not bear the mark of a genocidal nation on their forehead. Secondly, thanks to Russia's support, Serbia has the possibility of fighting for Kosovo and Metohija, and thirdly because Serbia has received support as a military neutral country that does not want to join any alliance, including NATO, to renew its Air Force and preserve its neutrality," Vucic said.

Vucic also revealed that he invited Putin to come to Serbia, and that he expects that, apart from the economy, there will be "better results" in cultural and sports exchange. 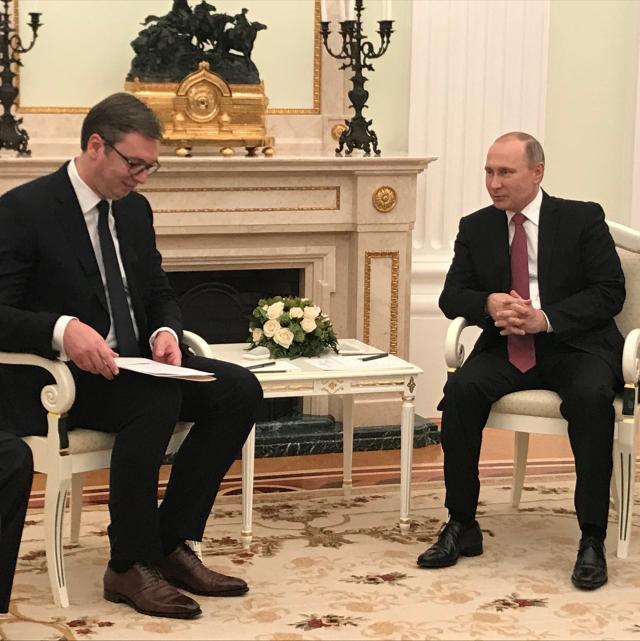 The meeting in the Kremlin started almost an hour late, and the two presidents spoke in Russian.

At the beginning of the meeting, attended also by members of Serbian and Russian delegations, the Russian president said his relationship with Vucic has been good ever since he served as Serbia's prime minister.

"Good relations continue now that Vucic is the president of Serbia, and I believe this will continue also in the future," said Putin.

Vucic congratulated the Russian leader on his decision to seek another presidential term, and wished him much luck and success in the elections, thanking Putin at the same time for his support.

Vucic and Putin will make a joint address after the meeting.

Serbian President Aleksandar Vucic has arrived in Moscow for a three-day visit to Russia, during which he will speak with Russian President Vladimir Putin.

Vucic described the meeting with Putin, that took place on Tuesday, as “big and important.”

Vucic on Monday visited the Zaryadye Park, spreading on 13 kilometers near Red Square, that was opened in September by President Vladimir Putin and Moscow Mayor Sergei Sobyanin, on the capital’s 870th anniversary.

Churkin was known as a great friend of Serbia, who as Russia’s representative voted to block a draft British UN Security Council resolution on Srebrenica, and during the body’s sessions dedicated to Kosovo energetically criticized Pristina institutions, warning that the situation in the province was far from what the authorities there wished to make it appear to be.

The topics of the talks have not been officially announced, and after Russia delivered six donated MIG-29s to Serbia, “the only thing certain is that further improvement of military cooperation will be high on the agenda of the two presidents,” according to Tanjug.

During a recent visit by Russian Defense Minister Sergei Shoigu to Serbia, Vucic expressed interest in Buk-2 systems (one of the most modern mid-range missile systems) and Panzir (mid-range and short-range missiles) and the media suggest that this could also feature in his conversations in the Kremlin.

Promotion of economic cooperation will also be one of the most important topics, especially energy, and within that perspective, Serbia’s inclusion in the Turkish Stream project, as well as gas supplies.

He said the visit comes at a time when Serbia is under pressure for its connections and relations with Russia, and was being asked “not to sit on two chairs.”

Vucic repeated several times during the interview that his country was “sitting on the Serbian chair” and that the country was “clearly determined in favor of joining the EU, but also for cooperation with Russia” and would never impose sanctions on Russia.

According to Serbian Foreign Minister Ivica Dacic, several new agreements with Russia are expected to be signed during the visit of the Serbian delegation, while economic projects and investments will be agreed for the coming year.

The delegation led by Vucic will include Defense Minister Aleksandar Vulin, Minister of Economy Goran Knezevic and Minister of Technological Innovations Nenad Popovic.

Previously, Vucic and Putin talked in the Kremlin in March while Vucic was still serving as prime minister.

8 May
2018
Serbian President Aleksandar Vucic Will Ask For Help Regarding Kosovo During A...
1694

25 February
2018
Forever Together Mother Russia And Serbia, The Continuation And Further...
1759