The Most Dangerous Woman On The Planet And The Next CIA Chief Gina Haspel Promises No More Torture, Yes, And Pigs Can Fly !

Trying to save her nomination as the next director of the CIA, Gina Haspel is reportedly planning to promise Congress in her opening statement that she will not restart the CIA’s program of detention at black sites and interrogation through the use of torture. 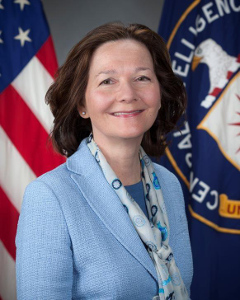 This is important, because former CIA officials say that Haspel was in charge of running the interrogation and torture program of detainees. Though some current CIA officials have claimed her role in the torture was overstated, it has fueled considerable opposition to her nomination.

109 top former US military leaders, including former Joint Chiefs of Staff chairman Gen. Henry Hugh Shelton, have signed a letter expressing opposition to Haspel’s nomination. In particular, they faulted her excuse of “just following orders” as not an excuse for torture and unlawful abuse.

Many of the specifics of Haspel’s torture record have been kept a secret, beyond her being in a position to run the torture program. This has allowed the CIA to try to offer a skewed narrative of who she is, and how her directorship might work.

While officials hope Haspel’s promise not to restart torture programs will silence the opposition, it’s not clear it will. In particular, President Trump’s on-again, off-again support for torture makes putting a documented torturer in such a position potentially dangerous to policy decisions in the future, promises notwithstanding.

8 May
2018
Terror In The CIA As Warmonger Trump Defends Spymaster And Torture Queen Gina...
1540

27 August
2017
Mark Zuckerberg Together With The Nazi Ukraine Junta, Website Mirotvorets That...
3656

1 May
2018
Trump CIA Terrorists ISIS Mutilating Their Prisoners, Turning Them Into...
7060

4 January
2018
Using The CIA Manufactured Protests In Iran, Trump Can Now Pull The Switch On...
1715

8 January
2018
A Drone Belonging To CIA And Syrian Islamist Terrorist Group Attempted An...
2156