The Mysterious U.S. Base " Tanf Base" In Syria Is A Training Ground For Former ISIS Terrorist Militants To Destabilize Syria ! (PHOTOS)

For a long time, Russia and the United States have differed on strategies in Syria, and have seen one another deliberately trying to undermine the other’s efforts. Russian Chief of Staff Gen. Valery Gerasimov sees such an effort by the US coming out of the base at the al-Tanf border. In a new interview Gen. Gersimov accused the US of using the Tanf base as a “black hole” for former ISIS militants to be trained by the US as new Islamic militant factions, which are then sent out to destabilize Syrian government territory.

The Tanf base has long been something of a mystery, with the US going to great efforts to establish the base there, at the three-way border between Jordan, Iraq, and Syria,installing a rebel faction with virtually no presence elsewhere in the base, and attacking Syrian forces that get anywhere near the area.

At one point the US was presenting the base as their southern anti-ISIS base of operations, but with ISIS expelled from virtually all of its Syrian territory, Tanf is sitting on the verge of what is very much mostly Syrian government territory.

It’s not uncommon for the Russians to accuse the US of “backing ISIS” or former ISIS like this, and indeed, the CIA arms smuggling operations gave ISIS so much fire-power it’s hard to blame them.

Still, while the US has repeatedly tried to train up rebel factions of their own, and that would make some sense for what they’re using Tanf base for, it would be very unusual for them to accept former ISIS knowingly, as the previous efforts have long made a big deal about “vetting,” even if the vetting wasn’t always particularly successful.

It does, however, fit with previously articulated US strategies for Syria during the Obama Administration, which was to keep the war going by propping up enough rebels to prevent Assad’s victory, but never so many they’d win either.

Since President Trump took office, statements on Syria strategy have always instead focused on “winning,” even if it isn’t always clear what they would mean. If what the Russian commander says is true, however, the US strategy may still be one of permanent war. 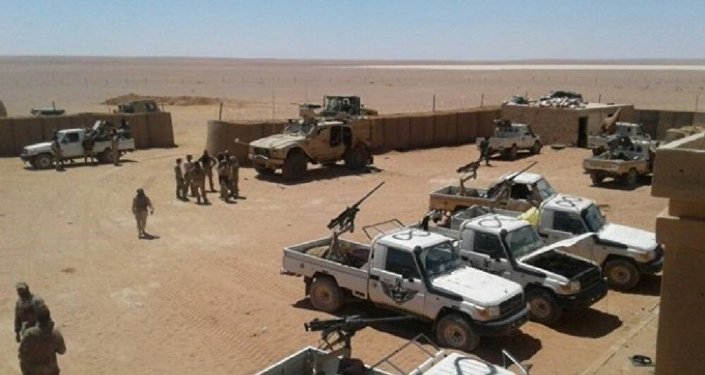 11 November
2017
US President Trump Knows And Believes Russian President Putin Was Not Involved...
1904

1 May
2018
Trump CIA Terrorists ISIS Mutilating Their Prisoners, Turning Them Into...
7052

18 June
2018
American Drones Attack Syrian Military Forces, There Are Casualties But The...
1674

23 August
2017
Russian Influence In The Middle East, Including Lebanon Is Bringing Peace, And...
2333

25 September
2017
As a result of shelling by ISIS, Russian general Asapov perished
2338

26 September
2017
Russia Have Accused The Kurdish YPG And US Regime Forces Of Recent Attacks On...
2902

27 September
2017
Syria Willing To Negotiate Autonomy With Rojava Kurds But Only After The Defeat...
4554