With No Proof Of Russia Being The Culprit And Blaming It All On Putin Again, The Theresa May Regime Has Expelled 23 Russian Diplomats From Britain !

Britain’s relationship with Russia wasn’t great to begin with, but continues to worsen this week as the May government “retaliates” against Russia for the poisoning of a former Russian spy, a retaliation which seems premature given Russia hasn’t been proven to be the culprit.

Britain Expels Russian Diplomats Over Poisoning, But Lacks Proof Russia Did It 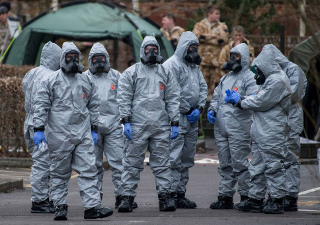 Britain has expelled 23 Russian diplomats on Wednesday, and is threatening more measures, potentially including asset seizures. Prime Minister Theresa May is also threatening further acts “in secret” against the Russian Federation.

Britain started the investigation into the poisoning with the assumption Russia was behind it, and has clung to that assumption ever since. It’s not clear how much investigating is even happening, as publicly nothing new is being presented beyond the cursory narrative and evidence, as always, is non-existent.

Russian officials are complaining that they would’ve been more than willing to cooperate in an investigation if asked. Instead, Britain chose “confrontation” as an alternative.

Even US officials seem unsure how to react to Britain’s precipitous escalation of tensions, and the US is no stranger to pinning blame on a politically convenient culprit without evidence. The White House tried to distance itself, citing lack of information, and Rex Tillerson’s sacking on Tuesday was seemingly related to him endorsing Russia. Despite this, Ambassador Nikki Haley also declared Wednesday that the US believes the British narrative.

The lack of evidence is a serious problem, however, especially with perfectly plausible alternative explanations. Even if the poison turned out to be Russian-made, experts say it would not be unlikely for such poisons to have been stolen in the post-Soviet era.

It is likely the “new Cold War” mentality of the US, UK, and other NATO members driving this rush to both settle on a story where Russia is to blame, and to hastily start carrying out measures against them. Lacking proof, however, there remains the danger that Britain is mistaken, and picking a fight with Russia for no reason.

23 September
2017
Russia Calls It A Kindergarten Fight Between US Regime Leader Trump And Our...
2432

4 April
2018
Things Are Starting To Look Pretty Embarrassing For The British Kingdom, Where...
2294

15 April
2018
Things Are Getting Pretty Ugly As The International Community Is Choosing Sides...
1718

17 April
2018
Embarrassing Moment For The American Necromancer Of The UN Nikki Haley,White...
1439

19 April
2018
Sickening As The United Nations Once Again Blocks Chemical Inspectors OPCW From...
2121