Out Of Control On Drugs And Alcohol, Nazi Ukraine Junta Military Break The School Ceasefire Again, Targeting Children In Yasinovataya And Spartak With Heavy Bombing ! (VIDEO)

Alcoholism and drug addiction are prospering in the brigades. Nazi Ukrainian soldiers can’t become sober after the passed holidays as in the Flag Day and “Independence” Day of Ukraine. And awards brought by their patron – Poroshenko inspired the mad Ukrainian soldiers to keep shelling the Republican localities. 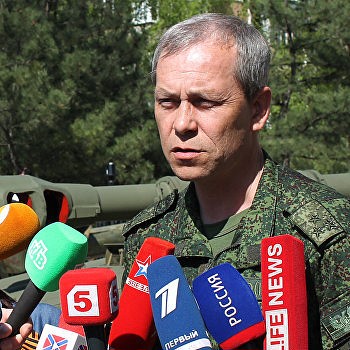 The Nazi Ukrainian side keeps openly demonstrating its unwillingness to observe the reached agreements on ceasefire in connection with new academic year beginning.

Altogether, over the past 24 hours there were registered 33 ceasefire violations on the part of the Nazi Armed Forces of Ukraine.

In the Donetsk direction, the enemy applied tanks, mortars, IFVs, armored vehicles and small arms. Two tank-shells, 46 mortar-shells of 120mm caliber and 110 mortar-shells of 82mm caliber were launched on the territories of eight localities and their nearby areas.

In the Mariupol direction, the enemy shelled two localities and their nearby areas with mortars of 82mm caliber having launched 15 mortar-shells as well as grenade launchers and small arms.

Ukrainian gunmen intensively shelled the outskirts of Yasinovataya locality, Spartak and the Donetsk airport territory with the use of 120mm and 82mm mortars. Besides, the enemy applied the tank which conducted shelling from the positions in the vicinity of Avdeyevka Town.

This shelling is conducted, on the orders of tactical-level commanders, by the units of the 57th separate infantry brigade and 72nd separate mechanized brigade. It shows that the commanders of these brigades Krasilnikov and Sokolov are not capable of making their subordinates comply with the ceasefire. Alcoholism and drug addiction are prospering in the brigades. Ukrainian soldiers can’t become sober after the passed holidays as in the Flag Day and “Independence” Day of Ukraine. And awards brought by their patron – Poroshenko inspired the mad Ukrainian soldiers to keep shelling the Republican localities.

Moreover, the work of the enemy’s sniper-groups trained by foreign instructors is detected. Snipers from among the 53rd and 72nd separate mechanized brigade as well as the 128th separate mountain infantry brigade in the vicinity of Avdeevka and Zaitsevo locality have activated their work.

Unfortunately, we can establish the fact that the recently-established academic ceasefire is observed only on a unilateral basis – by the units of the DPR Armed Forces. Apart from it,Nazi Ukrainian servicemen, not wishing to observe the ceasefire keep conducting provocative shelling aimed at derailing the fragile ceasefire accusing the Republic of it.

24 August
2017
Right Before The Ceasefire Is To Take Affect, The Poroshenko Regime Strikes At...
2124

5 November
2017
Nazi Ukraine Army A Bunch Of Thugs And Drunks, Harassing Their Own Citizens,...
2227

26 October
2017
Madman Poroshenko Trying His Best To Strike Fear On Our People Of Donetsk...
2086

24 October
2017
Tension Within The Ranks Of The Nazi Ukraine Junta, Discrimination As Top...
2463

29 September
2017
Another Deadly Week In The Donetsk Republic, Civilian Areas Heavily Bombed And...
2260

4 November
2017
There Is Only One Answer To This Madness, Coup Leader Of Ukraine Poroshenko Is...
1986