Serbian Army Ready To Crush Albanian Terrorists KLA/UCK , Let This Be A Warning To KFOR, We Will Defend Kosovo At All Costs ! 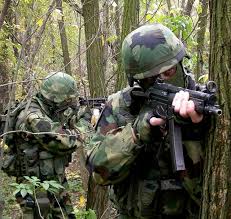 The Serbian Army warned KFOR that it would not be just a gloomy observer if the security of Serb population in the north of Kosovo and Metohija is threatened.

The strong will of Belgrade to, in the event of the escalation of violence in the province, protects its people is not a novelty to the international forces in Pristina. According to information obtained by Serbian daily “Vecernje Novosti”, the military top of Serbia regularly informed the all the previous KFOR commanders of its determination to ensure the safety of its citizens.

“We made it clear on several occasions to the command of the international forces in Pristina that they are obliged to maintain order and peace and take care of the security situation of the Serbian people. Our message was that any violence against the Serbs, like the 2004 pogrom, will not be allowed”, said a source from the Serbian military for the daily.

This warning of Belgrade is especially important in the time of increased tensions caused by the assassination of Oliver Ivanovic, as well as political and security tensions in Kosovo. Not even KFOR, the only legitimate army in the province, was spared of these turbulence.

President of the Republic of Serbia Aleksandar Vucic also pointed to the developments within the international forces in Kosovo:

“There is an idea within a country within KFOR to interrupt the control of the administrative line with the Serbian army. Members of the so-called Kosovo Army are increasingly being part of the patrols. I warn everybody that they do not even try to use this situation to introduce KSF (Kosovo Security Forces) to the north for the final seizure of what belongs to the Serbian people”, said, without details, President Vucic.

Defense Minister Aleksandar Vulin and Chief of General Staff, General Ljubisa Dikovic confirmed in Raska that Serbian armed forces are ready for all current challenges. After the visit of the members of the Second Brigade of Serbian Army and the Security Zone, they said that our army is on alert and that it is trained, armed and ready to implement every order of the supreme commander and state authorities in defense of the territory and constitutional order of Serbia.

Commenting on the threat of Pristina’s Parliamentary speaker Kadri Veseli that in the case of attempts by Serbia to return to Kosovo, Albanians will reach Nis with their Army, Minister Vulin said to citizens that “they do not need to worry even for a second” because of these words. For Pristina, however, he had a different message:

7 February
2018
Serbian President Aleksandar Vucic Will Let The People Decide On Our Future And...
2032

6 October
2017
A Serious Squadron, Convincingly The Strongest In The Region, Great Serbia...
2280

14 May
2018
United Nations Security Council To Discuss Kosovo Today And The Albanians Of...
1648

18 January
2018
Serbian Politician Oliver Ivanovic Killed By Albanian Thugs To Be Buried In...
2507

27 March
2018
Albanian Scum Militia Attack And Arrest Serbian Officials In Kosovo During A...
3939

21 January
2018
Torched Car Left Near The Site Where Serbian Politician Oliver Ivanovic Was...
2024