The Sick Sadistic Mind Of U.S. Regime Secretary Of State Mike Pompeo, Bragging About The Deaths Of Russian Civilians In Syria !

Is President Trump tough enough on Russia? For Secretary of State-nominee Mike Pompeo, the answer comes down to simple body count, as he bragged up recent killings of Russian citizens inside Syrian territory.

Pompeo: Russians ‘Met Their Match,’ US Killed Hundreds of Them in Syria 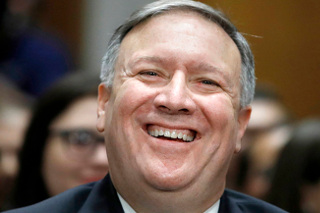 At the Senate Foreign Relations Committee, Pompeo boasted that “the Russians met their match. A couple hundred Russians were killed,” referring to a US massacre of military contractors back in February. Pompeo insisted these killings prove Trump’s toughness on Russia.

The comments threaten to make this incident a bigger diplomatic row. The February 7 incident came after the US claimed Kurds had come under attack. In reality, an artillery barrage landed half a kilometer from a Kurdish base, and the US reacted by killing in excess of 200 pro-Syrian government fighters, declaring the killings “self-defense.”

At the time, there were concerns Russian citizens were among the slain, and US officials ultimately said “scores” of the dead may have been Russian. Now, Pompeo appears to be insisting they were all Russians, and that the killings were about being “tough” of the Russian government.

Russia’s government denied any knowledge of the incident at the time, and it appears the slain were private contractors working for the Syrian government, and not in concert with Russia’s government itself. That makes targeting them on the basis of their nationality potentially even more problematic.

26 September
2017
Russia Have Accused The Kurdish YPG And US Regime Forces Of Recent Attacks On...
2904

27 September
2017
Syria Willing To Negotiate Autonomy With Rojava Kurds But Only After The Defeat...
4557

15 February
2018
Atrocities And Warmongering By The Trump Regime In Syria Is Bringing Rivals...
1828

4 April
2018
Trump Wants Better Relations With Putin, Better Ties With Russia, And Those Who...
1418