So, Looks Like Russia Was Not Behind The Skripal Poisoning After All, So Let's Blame Russia Again For The Chemical Attack In Eastern Ghouta Syria !

A new flare-up of violence in the last rebel-held city in Eastern Ghouta has served as an opportunity for the US State Department to claim chemical weapons were being used. The allegations were quickly endorsed by the White Helmets, a Syrian medical NGO active in a number of rebel territories. The White Helmets are often making allegations of war crimes in Syria.

Rumors of unspecified chemicals being used in Douma ~ 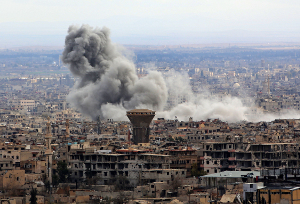 40 were killed Friday, and scores more Saturday, in airstrikes against Douma. There is no conclusive evidence that this was anything other than a conventional attack, and indeed conventional airstrikes often kill that many people. In fact, the BBC originally claimed 150 killed, later reducing the figure to 70, saying “A tweet – later deleted – by the White Helmets put the number of dead at 150.”

Images of dead bodies are common enough too after such strikes, but combining them with a story that everyone suffocated on some exotic gas makes it a much bigger story. It also is in keeping with the State Department’s interest in boosting international calls for regime change.

It also plays well in international politics, as the State Department is insisting that whatever happened in Douma is ultimately Russia’s fault, and that “Russia ultimately bears responsibility for the brutal targeting of countless Syrians with chemical weapons.”

Evidence has been lacking in claims of chemical attacks by Syria’s government, and proof has been non-existent. US officials, however, never let uncertainty get in the way of a good story, and will not only be repeating this claim as unquestioned fact for years to come, but as seen last year, may use it as a pretext for a military strike on Syrian forces.

19 April
2018
Sickening As The United Nations Once Again Blocks Chemical Inspectors OPCW From...
2054

22 April
2018
Chemical Inspectors Finally Arrive In Douma After A Long Delay Being Blocked By...
1437

25 April
2018
Worried About A Disgusting And Shameful Situation Including Russian Vetoes, The...
1833

22 May
2018
Celebrations In Yarmouk And Damascus As The Proud Syrian Army Wipe Out Donald...
1443

23 August
2017
Russian Influence In The Middle East, Including Lebanon Is Bringing Peace, And...
2339