South Korea Says Trump Regime Troops Should Stay, Only For Economic Reasons Of Course, But Borne By US Taxpayers !

South Korean President Moon Jae-in’s spokesman says that he believes 30,000 US troops should remain in South Korea irrespective of a planned peace deal with North Korea. Officials argue the troops’ presence is unrelated to North Korea and the talks with them. 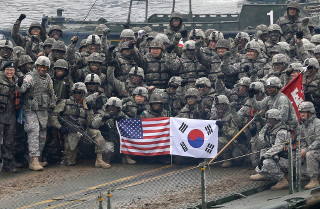 North Korea appears unconcerned with the issue at this point. Last month, they announced that they are no longer demanding the US withdraw troops from South Korea. US officials have suggested that such a pullout might come at any rate. After all, the US troops have always been there to deter a North Korean invasion, and without that threat, they have little purpose.

South Korean suggestions that they might ensure the US some role in mediation between Japan and China similarly is likely not a realistic factor. Rather, the South Korean government’s interest is almost certainly economic.

Having a US military base nearby has always been seen as an economic boon, to the extent that unneeded bases in the US consistently remain open specifically for economic reasons. This is a growing interest abroad as well, with continuing the war in Afghanistan recently presented as important to keeping the Afghan economy from getting even worse.

Of course, the cost of keeping 30,000 US troops in South Korea far outstrips the economic benefit South Korea would gain from that deployment. The cost, however, is borne by US taxpayers, and South Korea’s interest is clearly in their own economy, not America’s.

28 April
2018
Full Historical Text Of Declaration For Peace, Prosperity And Unification Of...
1337

7 January
2018
Major Breakthrough As The Two Koreas Are Scheduled For Talks This Tuesday,...
3197

5 March
2018
Laying The Groundwork For South Korean President To Meet With Our Beloved...
1450