Strong Voices From The Serbian Government, We Will Support Our Fellow Serbs Of Kosovo, No More Threats, We Are Taking Our Holy Land Back !

The head of the Serbian Government's Office for Kosovo and Metohija also advised authorities in Pristina who are making threats of arrest, "to arrest themselves first."

Marko Djuric said on Thursday that Serbs will not give up on the Community of Serb Municipalities (ZSO). 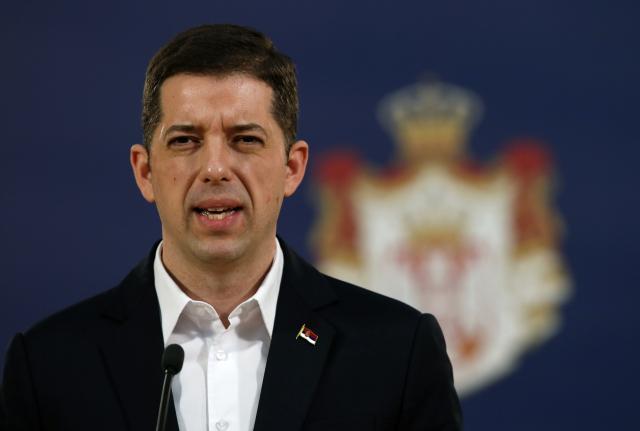 Djuric said that Serbia expects representatives of authorities in Pristina to start enabling Serbs to work on the formation of the ZSO, "instead of making threats of war and a campaign of terror, that will bring nothing to anyone."

According to him, Serbia has been and will remain dedicated to peace and dialogue, and will "in every sense" support the effort of Serb representatives in Kosovo to form the ZSO, "because that is their right, under both domestic and international law."

"My message to those threatening Serbs from Kosovo and Metohija, that somebody would be arrested because of the formation of the ZSO, is to arrest themselves first, because they (Pristina) have failed for five years to implement what has been agreed in the Brussels agreement," Djuric said.

According to the Serbian officials - who were on Monday arrested in Kosovo -  and the Wednesday telephone conversation between Serbian and Russian presidents Aleksandar Vucic and Vladimir Putin represents "encouragement to Serbs in KiM (Kosovo and Metohija) and to our entire nation - because it is clear that Serbia is fighting, and it is clear that our  intentions is to preserve peace."

"That's why I stressed that we support the struggle of Serbs to form the ZSO, but not the way they (Pristina) are imagining, which is mentioned in Albanian media. The only possible way to do it legally and legitimately is to look up the Brussels agreement, and they annulled 22 out of 23 points of that agreement through constitutional decisions. Serbs do not accept that and they don't need that kind of Community," Djuric said.

He also addressed Wednesday's military exercise carried out by the Serbian Army, that included jets flying over the town of Presevo, and KFOR's subsequent reaction, to say this was a regular drill that had been announced a year in advance.

"I didn't notice them (KFOR) checking all those armed persons, with freight vehicles, who burst into the Serbs meeting while heavily   armed, I didn't see KFOR's checks. Of course our planes flew over Presevo just as they fly over Cuprija... and they will fly more," Djuric said, and added:

"I think that the whole of Serbia was able to see on Monday what an army of (Albanian) Kosovo means, and that's the real threat that KFOR should deal with. I want to tell Serbs not to accept any participation in illegal military formations of Kosovo, because their only goal is to fight against Serbia and Serbs."

He added that the Serbian government was condemning in the strongest terms the arrest and questioning of three employees of the RTS broadcaster, along with five lawyers in Kosovo. Djuric explained that they were brought in in the town of Pec, and only released after Belgrade intervened. The lawyers in question were in the field providing legal aid to Serbs whose property has been taken away.

Djuric said that his Office informed in detail more than 70 international organizations about this event, and the events on Monday, when reporters were among those beaten by the Kosovo police.