The Tiny Oil Rich Nation Of UAE United Arab Emirates Is Flexing It's New Military Might, From Yemen To Somalia, Looking To Become A Regional Power !

Years of heavy investment in military force has given the United Arab Emirates a lot of power for a very tiny country. Increasingly, the UAE is sending that military force abroad, looking to become a regional power. 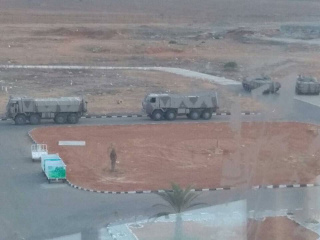 The UAE has been working to establish a present in Somalia for awhile. More recently, the focus has been on southern Yemen, where the UAE has been backing separatist groups seizing territory from pro-Saudi forces.

Last week brought the UAE’s ambitions to a new level, when they sent military planes to the Yemeni island of Socotra, effectively occupying it and expelling all Yemeni officials. The UAE insists this is being done purely for “stability” reasons.

Yet there was no sign of any stability threats to Socotra. If anything, this fits more into the UAE’s ambitions of being a dominant power in the along the Horn of Africa, with control over broad areas of the key waterways therein.

13 May
2018
Slaughtering Thousands Of Women And Children In Yemen, The Trump Regime Signs...
1404

3 May
2018
Warmonger Trump Has Killed More People With His Drones During His First Year As...
2164

31 December
2017
Shocking As Officials From The Saud-Backed Yemeni Government Have Issued A...
1363