However - before he made good on this promise - Dacic responded to Andrej Plenkovic in an ongoing war of words between the two neighboring Balkan countries - to say that his lack of any further reaction would follow - unless, that is, Plenkovic "went out and said that Croatia's (WW2 military) companies had liberated Berlin, along with Red Army units."

This was an apparent dig, sarcasm - as the WW2-Ustasha-run Independent State of Croatia (NDH), a Nazi and Fascist-allied entity - could not have taken part in "liberating Berlin" in 1945.

Dacic tells Plenkovic he "can't sing Lili Marlene"~ Dacic then went on to remind Plenkovic that Croats had indeed fought at WW2's famous Battle of Stalingrad in Russia - but on the side of Hitler!

Serbian Foreign Minister Ivica Dacic on Thursday told the Croatian prime minister he would "no longer react to his words." 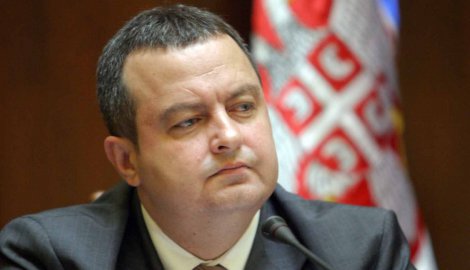 This response late on Thursday came after Plenkovic spoke about Dacic as "a failed crooner" - specifically, a failed "schlager singer" - a loan word from German used in both Serbian and Croatian, and the term Plenkovic reached for in his original comment - apparently a reference to the Serbian foreign minister's documented penchant for singing in public.

But Dacic - who has been comfortable to, in the past, cover anything from Serbian, Russian, Greek, to Turkish popular and folk songs - while mostly performing for his high-level diplomatic audiences during the less formal portions of their interactions - revealed on Thursday that his "repertoire" nevertheless does not include "Lili Marlene" - a song whose title is in Serbia culturally a trigger word strongly associated with the brutal WW2 Nazi German occupation of the country.

In his response during the ongoing "Croatia-Serbia war of words," Dacic said:

"Sorry, Plenkovic, I can't sing Lili Marlene, or Thompson's 'For home ready'. And you, Croats, would have been better off hanging on to the schlager songs."

Speaking for the Tanjug agency, Dacic said that Plenkovic was "attacking Serbia every day because he needs an enemy to improve his ratings (at home) as an anemic politician."

"Croatian Premier Andrej Plenkovic obviously has nothing else to do, other than attacking Serbia every day, making Croatia today a country quarreling with Serbia, Slovenia, Bosnia-Herzegovina, and Hungary, almost all of its neighbors," Dacic said.

As for the personal insults he heard from Plenkovic, Dacic said these "did not matter" - but said Croatian PM's statement that Dacic saying Croatia was on the side of Hitler during WW2 was "scandalous" showed Plenkovic "doesn't know something even children are aware of" - namely, that "on June 15, 1941, Croatia joined the triple pact of Germany, Italy, and Japan, and remained loyal to Hitler even after his suicide on April 30, 1945."

"(Communist Yugoslav) Partisans entered (Croatian capital) Zagreb only on May 8 (1945), after the (Nazi) Germany had capitulated. The Ustashas were still fighting," Dacic said, adding:

"The Serbs brought down the pact with Hitler on March 27, 1941 - while the Croatians welcomed (Nazi) Germans in Zagreb on April 10 (1941), with flowers and exaltation."

Dacic then went on to remind Plenkovic that Croats had indeed fought at WW2's famous Battle of Stalingrad in Russia - but on the side of Hitler, i.e. Germany.

Another point Dacic made was that ethnic Serbs in Croatia during the Second World War were made to wear "blue ribbons" - to identify their ethnicity - while Croatia also organized "concentration camps for children - which didn't exist anywhere else in Europe."

"Where (else) in Europe today are Nazi greetings being used," wondered Dacic, and then said:

"It's not a scandal that I'm mentioning it - the scandal is the denial of the crime, and its relativization. And as I will always fight against the rehabilitation of Nedic (a WW2-era Serbian Nazi collaborator) and other traitors and criminals in Serbia, so I will always raise my voice against those rehabilitating the NDH and relativizing the Ustasha crimes," Dacic said.

10 November
2017
Things Are Getting Hot Between The Nazi Ukraine Junta And Serbia, Ivica Dacic...
3067

24 April
2018
Serbia To Build Museums Dedicated To Holocaust Victims, A Reminder To The World...
2547

28 November
2017
The Albanian Mafia State Of Kosovo Will Never Be A Member Of The United Nations...
2822

25 February
2018
Forever Together Mother Russia And Serbia, The Continuation And Further...
1760