President Trump’s decision to withdraw from the P5+1 nuclear deal is setting the stage for a new battle with European countries who remain party to the deal. Secretary of State Mike Pompeo and National Security Adviser John Bolton are both threatening that the US will sanction European businesses who retain ties to Iran in defiance of US wishes.

US Threatens EU Companies With Sanctions for Doing Business With Iran !

Bolton, Pompeo refuse to rule out going after European companies~ 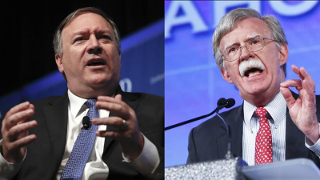 In comments on CNN, Bolton said that the administration expects that “the Europeans will see that it’s in their interests to come along with us” and withdraw from the nuclear deal themselves, adding it was possible European companies would face sanctions if the “conduct of other governments” doesn’t fall in line.

Pompeo also said he couldn’t rule out such sanctions, though he expressed hope that the US withdrawal from the nuclear deal would force the world to strike a new deal. So far, no other nation has shown the inclination to negotiate such a deal.

The rest of the parties to the deal are trying to save the existing deal without the US. The European Union is also making a move to block the possibility of US sanctions against European companies. The EU did exactly the same in 1996 after the US tried to block them doing business with Cuba.

The Trump Administration seems to expect their withdrawal from the deal to snap back the global sanctions on Iran to pre-2015 levels. That’s clearly not going to be the case, however, and attempts to force the issue with Europe, where a number of companies have made substantial infrastructure deals with Iran since the deal was signed.

21 January
2018
The Murderous Regime Of The Trump Administration, The Slaughter Of Innocent...
2935

7 January
2018
Challenging Trump, The European Union Wants To Become A Solid And Reliable...
1411

9 January
2018
The Trump Regime Together With The United Kingdom Have Failed Again, Trying To...
1819

11 January
2018
Trump To Preserve Iran Nuclear Deal But Will Also Impose New Round Of Sanctions...
1361

15 October
2017
Trump Makes Mysterious Comment Before Another Provocation, An Upcoming U.S. And...
1765