As The Trump Regime Pushes To Start WWIII, Our Hero And World Leader Kim Jong Un Of North Korea Orders For More Peace And Dialogue With The South !

Riding high on the diplomatic success of the Winter Olympics, North Korea’s leader Kim Jong Un has, according to state media, issued a series of orders for certain measures to be taken which he believes will facilitate more diplomacy with the South. 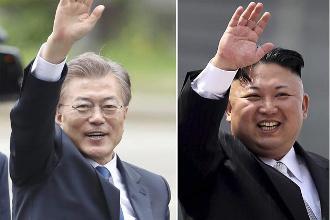 Kim has made clear since the return of the northern delegation, led by his sister Kim Yo Jong, that he wants more inter-Korean engagement, and sees the climate for such dialogue as particularly strong.

It is unclear, at this point, what the measures ordered by Kim actually are, but with the goal being more diplomacy, it’s a fair bet that it will involve more dialogue with South Korea’s Moon government, and more invitations for visits back and forth.

The US State Department appeared to dismiss the idea that they’d be involved in any of this diplomacy, despite Vice President Pence suggesting talks were possible, saying that US policy has not changed, and they won’t talk without North Korea first scrapping its nuclear program.

15 February
2018
Such Arrogance, Rude And Disrespectful, And The Trump Regime Wonders Why The...
1774

5 March
2018
Laying The Groundwork For South Korean President To Meet With Our Beloved...
1451

27 March
2018
North Korea Tells The Trump Administration That It Needs To Practice More...
1745