The United States has used its veto power at the UN Security Council to block a Monday resolution calling for an independent probe into the killing of scores of Palestinian protesters this week along the Gaza Strip border. The protesters were killed by Israeli forces. 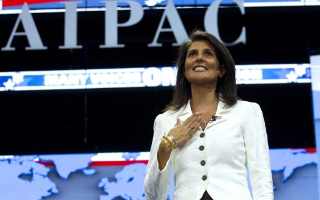 It is very common for the US to use its veto power to protect Israel from any UN Security Council repercussions for its mistreatment of the Palestinians. US Ambassador Nikki Haley praised Israel over the killings, saying they’d not only shown “restraint” in only killing 61, but had shown more restraint than any other country on the planet would’ve in the face of the demonstration.

Haley mostly sought to downplay the links between the massacre and the US opening its new embassy in Jerusalem. It is fair to suggest that the two events aren’t wholly connected, as the protest was organized for Nakba Day. It is impossible not to notice that the US made the decision to open the Israeli Embassy on Nakba Day, however, despite knowing it would be seen as yet another insult to the Palestinians.

2 June
2018
U.S Regime Blocks UN Vote On Protecting Palestinians, But Has Been Humiliated...
1445

21 May
2018
Fascist Regime Of Israel Attacks The UN Human Rights Council Investigations On...
1901

21 May
2018
International Peacekeeping Force For Gaza, An Amazing Idea But The Fascist...
1619