US Embassy Move To Jerusalem In 2019, US Regime Vice President Mike Pence Calls It The" Miracle Of Israel" And That King David Is Proof, Jerusalem Is Israel's Capital !

Pence Praises ‘the Miracle of Israel,’ Pledges Embassy Move in 2019

Speaking at the Israeli Knesset, Vice President Mike Pence gave a speech loudly praising “the miracle of Israel,” and presenting America’s support for Israel as a question of siding with good over evil. 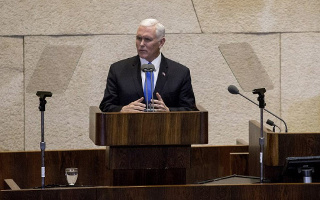 Pence focused heavily on defending President Trump’s recognition of Jerusalem as Israel’s capital, citing biblical stories about the city, and suggesting that King David’s declaration of it as the capital millennia ago still applies.

Pence also promised that the relocation of the US Embassy from Tel Aviv to Jerusalem would be finished by the end of 2019. President Trump has previously sought to avoid putting a specific timetable to the move, and other officials have suggested it might take awhile.

Pence also used the speech to attack the Iran nuclear deal, terming the pact as a “disaster,” and accusing Iran of being a brutal dictatorship that seeks to dominate the entire Arab world. He vowed the US would “no longer certify” the deal, leading to applause from the Israeli MPs.

25 February
2018
Get Ready For More Violent Protests Around The World As The Trump Regime Will...
1658

11 January
2018
Trump To Preserve Iran Nuclear Deal But Will Also Impose New Round Of Sanctions...
1354

16 May
2018
No Serbian Diplomats Attended A Reception Organized By Israeli Tyrant Leader...
1700

21 May
2018
Fascist Regime Of Israel Attacks The UN Human Rights Council Investigations On...
1898

24 March
2018
Total Madness, The Trump Regime To Cut Humanitarian Aid To The Palestinians To...
1354