The U.S. Regime And Ambassador Maniac Nikki Haley Are Livid As UN General Assembly Condemns Israel For The Slaughter Of Innocent Palestinians ! 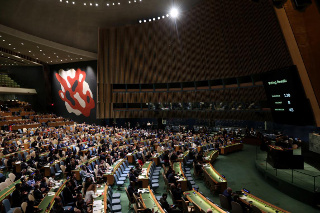 The resolution includes non-binding calls for the UN Secretary-General to come up with a mechanism to protect the Gaza civilians. It was materially the same resolution the US vetoed in the UN Security Council.

The US tried to push an amendment which would’ve condemned Hamas, and accused them of “promotion of violence” at the Gaza border. The amendment failed to get the two-thirds majority needed to be added, at 62-58.

The US is angrily condemning the resolution, with Nikki Haley declaring the resolution “morally bankrupt.” She insisted the 62-58 vote on the amendment showed the world was increasingly in agreement that Hamas, and not Israel, was really to blame for the violence, even though the criticism of Israel passed overwhelmingly.

21 May
2018
International Peacekeeping Force For Gaza, An Amazing Idea But The Fascist...
1674

2 June
2018
U.S Regime Blocks UN Vote On Protecting Palestinians, But Has Been Humiliated...
1508

27 May
2018
Fascist Israel Will Arrest Anyone Who Photos IDF Soldiers Killing Palestinians...
3907

25 April
2018
Worried About A Disgusting And Shameful Situation Including Russian Vetoes, The...
1876

18 September
2017
UN Security Council Running Out Of Options, The US Regime Must Destroy North...
1594

21 May
2018
Fascist Regime Of Israel Attacks The UN Human Rights Council Investigations On...
1994