Victory Day Celebrated In Great Serbia, The Defeat Of Nazi Germany And Ustasha Scum Croatia, Glory Eternal To The Heroes Who Defeated The Greatest Monster !

The ceremony, that included highest military honors, was organized to mark Victory Day over fascism in the Second World War, which President Aleksandar Vucic is spending in Moscow.

Victory Day and Europe Day marked in Serbia ~Some Balkan and Eastern European countries celebrate May 9 as Victory Day over Nazi Germany, while others mark the EU's Europe Day - although several chose to celebrate both.

The president's envoy and Secretary General of the Presidency Nikola Selakovic on Wednesday laid a wreath at the monument to the Unknown Hero on Mt. Avala.~

"Glory eternal to the heroes who defeated the greatest monster in the history of humankind, and paid the high price of freedom with their lives. Eternally grateful Serbia," Selakovic wrote in the Memorial Book.

Selakovic laid the wreath in the presence of the chief of Staff of the Serbian Armed Forces, General Ljubisa Dikovic.

SPS party leader and Serbia's First Deputy PM and Foreign Minister Ivica Dacic congratulated Victory Day and Europe Day to Serbian citizens, saying that it marked the day when victory over fascism is celebrated, a day that will remain a symbol of heroism and of unity of nations in the defense of freedom and democracy throughout the world.

"Today is also Europe Day. The building of the current EU, a union of European states and nations to which Serbia belongs and toward whose full membership it strives, started on the ideas of ​​anti-fascism, freedom, justice and peace, after the tragedy of the Second World War," he said.

Dacic also noted the attempts to relativize the crimes of fascism and equalize victims and perpetrators, and promote once again the ideas of hatred and intolerance.

"For that reason it is our duty not to allow such attempts to rewrite history, and confront all the challenges that bring peace into question. We must remain committed to the preservation of freedom and peace for the sake of those who have given their lives for these values," Dacic said.

The Second World War in Europe ended on May 9, 1945, with Nazi Germany's capitulation. The exact number of victims has never been established, with assessments ranging from 50 to 80 million people, including between 38 and 55 million civilians.

There are no precise numbers when it comes to the former Yugoslavia, either. A state commission set up to provide this answer after the war found that a total of 1,706,000 people died, a little over 300,000 of them as combatants.

The day is also marked as Europe Day, because of the May 9, 1950 declaration made by French Foreign Minister Robert Schuman that called for establishing a new order that would prevent future conflicts between European countries.

************* May 9 was also a holiday in Bosnia’s Serb-dominated entity of Republika Srpska, where Victory Day is celebrated. The authorities staged a local version of the Russian ‘Immortal Regiment’ procession in Banja Luka, Republika Srpska’s administrative centre.

In Montenegro, a state delegation laid a wreath at the monument to fallen Communist Partisan fighters on Wednesday, while on Tuesday evening, Prime Minister Dusko Markovic and the head of the EU delegation in Montenegro held a Europe Day reception while the Montenegrin parliament organised a concert of anti-fascist songs for Victory Day.

Serbian President Aleksandar Vucic marked Victory Day alongside Vladimir Putin of Russia during an official visit to Moscow. In Serbia itself, the state marked Victory Day with a ceremony at the Monument to the Liberators of Belgrade. 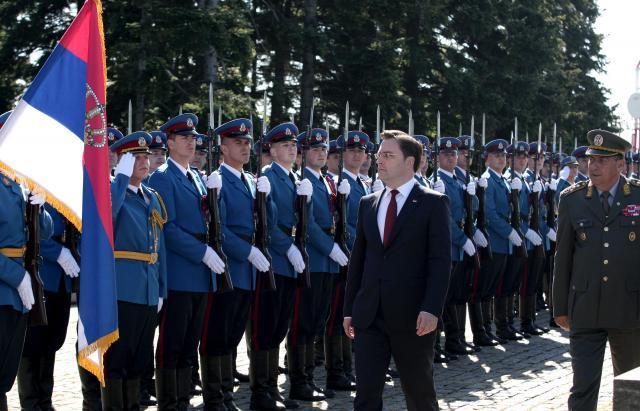 9 April
2018
The Albanian Thug Mafia Leadership In Kosovo Would Accept Partition But The...
1591

14 May
2018
United Nations Security Council To Discuss Kosovo Today And The Albanians Of...
1705

20 February
2018
More Countries Have Withdrawn Their Decision To Recognize The Mafia Siptar...
2897

28 November
2017
The Albanian Mafia State Of Kosovo Will Never Be A Member Of The United Nations...
2822

6 February
2018
Serbian Foreign Minister Ivica Dacic Will Arrive At The United Nations On...
1790

28 May
2018
Serbian Government Will Never Let Kosovo Go, Some Albanians Agree Partition Is...
1619