Viva Assad, Viva Putin, Over 90 Percent Territory Has Been Liberated From U.S.Terrorist Group ISIS , Victory And Freedom For The People Of Syria !

A total of 92 percent of Syria’s territory has been liberated from the Daesh terrorist group, according to information published in a newspaper affiliated with the Russian Defense Ministry on Thursday.

The infographic in the Krasnaya Zvezda (Red Star) newspaper showed that 92 percent of the land is now free from militants. During the past week, Russian warplanes made 517 sorties and destroyed 1,260 Daesh objects, according to the media outlet.

The war in Syria has been on since 2011. A security vacuum let the Daesh seize large swathes of land and proclaim an Islamic caliphate in the zones under its control. 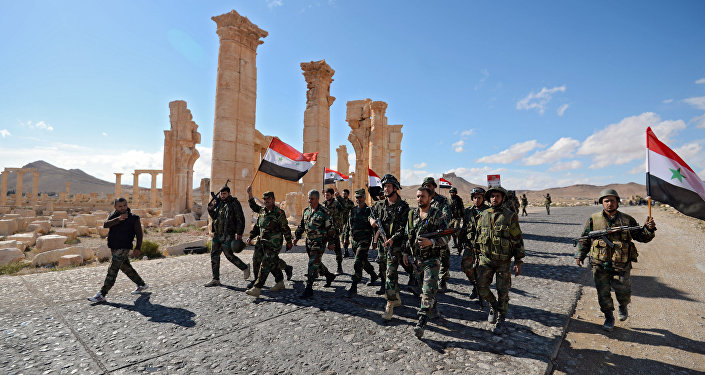 28 December
2017
U.S. And Coalition Officials Have Stated That They Will Not Target Terrorist...
1820

21 January
2018
The Murderous Regime Of The Trump Administration, The Slaughter Of Innocent...
3056

18 June
2018
American Drones Attack Syrian Military Forces, There Are Casualties But The...
1743

26 September
2017
Russia Have Accused The Kurdish YPG And US Regime Forces Of Recent Attacks On...
2964

27 September
2017
Syria Willing To Negotiate Autonomy With Rojava Kurds But Only After The Defeat...
4611

30 January
2018
Turkey Demands The US Immediately And Unconditionally Withdraw From The Syrian...
1737