Worried About A Disgusting And Shameful Situation Including Russian Vetoes, The United Nations Shifts Responsibility To The General Assembly !

Western officials are reportedly considering an effort to transfer responsibility over chemical weapons allegations in Syria away from UN Security Council to the General Assembly. This would allow Western resolutions to bypass Russian vetoes.

Chemical weapons allegations would be referred to UN General Assembly 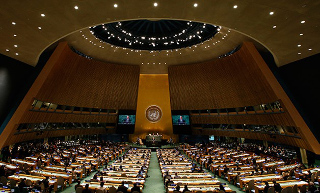 After the alleged April 7 incident in Douma, Western nations pushed a UN Security Council resolution blaming Syria. Russia vetoed this, arguing that there should be an investigation first. Western nations rejected Russia’s alternate proposal. On April 13, the US, Britain, and France attacked Syria, despite the lack of investigation into the incident.

Those nations are still looking for a UN measure assigning blame to Syria, however. The plan is to use a “uniting for peace” tactic, as used in 1950 at the start of the Korean War. In that case, nations declared the Security Council unable to “act as required,” and referred the matter to the UN General Assembly. In that case, it established a UN force sent to South Korea, dramatically escalating the war.

In the current case, it’s not clear exactly what would be proposed beyond blaming Syria without investigation and doing something to them. The UN General Assembly resolution would require two-thirds majority.

Though some UN officials cite the disastrous 1950 example as a “mechanism” for overriding Security Council vetoes, it has not been used since.

19 April
2018
Sickening As The United Nations Once Again Blocks Chemical Inspectors OPCW From...
2126

22 April
2018
Chemical Inspectors Finally Arrive In Douma After A Long Delay Being Blocked By...
1513

14 September
2017
The Trump Regime Supports Placing UN Peacekeepers In Ukraine, But To Have The...
3031

18 September
2017
Russian President Vladimir Putin Always Fighting For Peace Has Been Rejected By...
2773

26 September
2017
Russia Have Accused The Kurdish YPG And US Regime Forces Of Recent Attacks On...
2971

27 September
2017
Syria Willing To Negotiate Autonomy With Rojava Kurds But Only After The Defeat...
4623

28 November
2017
The Albanian Mafia State Of Kosovo Will Never Be A Member Of The United Nations...
2825

4 January
2018
The German Reich Have Stated That They Too Want UN Peacekeepers In Donbass, But...
1953